Anderson Ojwang: How Raila's Nicknames Have Shaped His Political Career

By Summary (self media writer) | 3 months ago

Prime Minister Raila Odinga has earned various nicknames which have shaped his political career and destinations.

The nicknames have not only endeared him to the electorates but amplified his stature and rating nationally. 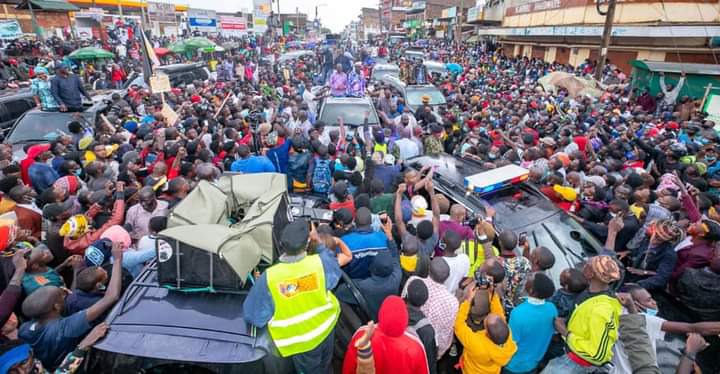 After the death of his father Jaramogi Odinga and his eventual defection to little known NDP to contest for Langata parliamentary by election after he resigned from parliament, he was nicknamed by his supporters Agwambo( mystery).

The name galvanized for Raila the Nyanza and coast vote block.

For his supporters, he had invisible powers and that is how he swept to the oblivion his competitors from nyanza namely James Orengo, Peter Anyang Nyongo and Shem Ochuodho.

Raila rehabilitated Nyongo and Orengo who have become members of his kitchen cabinet.

From Agwambo, Raila was nicknamed Tinga during his cooperation with president Moi' Kanu after 1997 presidential election.

NDP later merged with Kanu and the name tinga became synonymous with Raila.

People often joked that jogoo had swallowed the tractor but Agwambo supporters would respond that the tractor was ploughing inside the cock.

Just like his name Agwambo , Raila led a mass defection from Kanu after a fall out with Moi over succession politics.

With Kibaki on wheel chair, tinga went to plough the country hunting votes for Kibaki to become the third president after Moi.

In 2007 presidential election, Raila was nicknamed arap Mibey by the Kalenjin community.

The name made him popular in the community. This forced William Ruto to make about turn and support Raila' candidature in 2007.

The Kalenjin community were so passionate about Arap Mibey and voted him overwhelming.

Jakom in any organisation is expected to be the centre of reasoning, authority and peace.

Raila as jakom navigated the nation through a delicate moments in the country that could have resulted into a full blown conflict.

As jakom, he honourably accepted the supreme court ruling of 2013 and moved on. He gave President Uhuru Kenyatta time to rule and to implement his agenda.

In 2017 election when the country was at the brink of collapse Jakom and Uhuru came up with a handshake that has united the country and ended violent protest.

Currently, Raila has been nicknamed Baba ( father). Baba is the head of a family and everyone looks up to him.

From all the political divide, his friends and foe alike they call him Baba.

With his eyes on the ball, Baba is gathering a political storm that could catapult him to state house.

With the traction he is gaining currently, Baba may just be the Baba of the nation after Uhuru exit next year.

6 Ways to Overcome Common Mistakes and Convert Obstacles into Opportunities