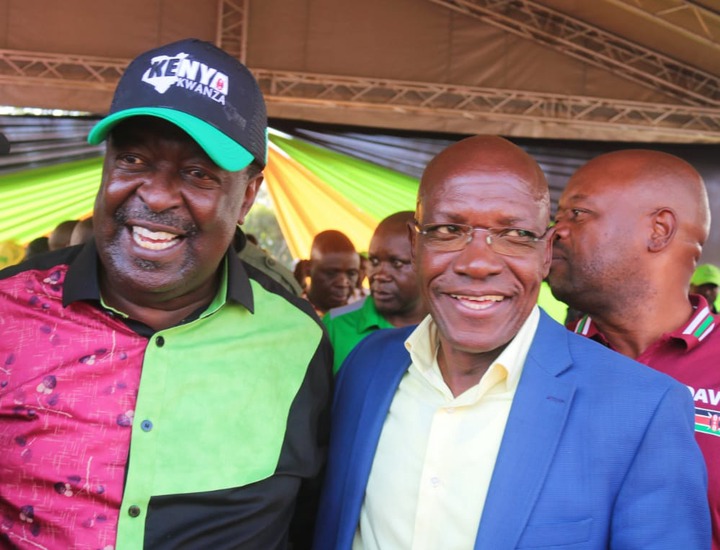 Former Kakamega senator Dr. Boni Khalwale has dismissed reports that their is disagreement between UDA and ANC candidates in Kakamega. The report indicates that aspirant Boni Khalwale has stirred up the coalition’s campaigns. This is after Khalwale demanded that ANC party leader Musalia Mudavadi denounces his party’s candidates in favour of those of the UDA.

The report also indicates that UDA vice-chairman is uncomfortable with the candidature of Senator Cleophas Malalah of ANC. Also other other candidates from Musalia’s party in Kakamega aren't in a good terms with the UDA chairman. Bonny Khalwale is a senatorial aspirant for Kakamega County on a UDA ticket come August general polls.

Further, according the reports Dr. Kahwale has been accused of waging a silent campaign against Senator Malalah. Dr. Khalwale, during the launch of Malalah’s manifesto asked Mudavadi to “rise above Kakamega politics.” The reports indicates that Khalwale singled out Mumias East and Mumias West constituencies. Khalwale accused ANC nominees of flip-flopping, alleging that rivals Benson Mapwoni and Rashid Echesa had an edge over them.

During Malala's event at Mumias on Saturday July 2nd, reports also indicate that Khalwale publicly asked Mudavadi to stop interfering with local politics. The senatorial aspirant urged Mudavadi to concentrate on the bigger picture. According to Peoples Daily, Mumias East MP Benjamin Washiali faulted Khalwale’s remarks in Mumias. Washiali called for sobriety and unity in Kenya Kwanza alliance. Hon. Washiali is a campaign coordinator of DP William Ruto in Kakamega County. Dr. Kahwale has noted that the reports on UDA and ANC rivary between candidates in Kakamega is 'gutter press.'

Ways in Which Kenyan politicians Campaigned in 2022

What A Motorist Did On The Nairobi Expressway That Has Left Kenyans Talking.