Orange Democratic Movement Party Leader Hon Raila Odinga now says what happened in the Bomas of Kenya during the Counting and Tallying of Presidential votes was a pure comedy that culminated in overturning the will of the People.

Speaking on Wednesday as reported by Kenyans.co.ke, the Former Prime Minister has for the first time revealed how IEBC Chairman Hon Wafula Chebukati called him informing him that he was about to release the 2022 presidential election results even though his (Raila) attempts to seek a sneak pic of what was expected turned futile.

Additionally, Raila claimed that they suspected how Chebukati had arrived at the final Presidential results owing to the fact that he had gone home to relax with family.

According to Raila, he asked to know the details of the discussion including the results but Chebukati refused to reveal the results ahead of time.

"Initially, Chebukati told us that he was tired, and retired to bed. He went at 12am then returned at 9pm,"

"At the time, other commissioners were counting the votes as Chebukati slept. Only for him to come back later and discard everything that was going on, claiming that he had the real results," Raila claimed. 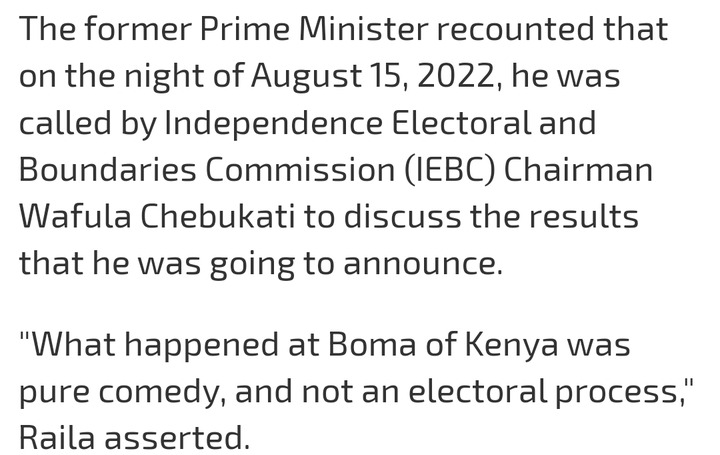