Speaking to the media from Naivasha on Monday when Raila had held a consultative meeting with a section of the governors, Kivutha alleged that the residents and leadership of Makueni urged him to support Raila under his Azimio La Umoja Movement, saying he still have years to contest for the top seat.

Kibwana who hosted Raila in Wote last year during his Ukambani Azimio rally, on Monday expressed his confidence that Raila will be the fifth president, saying that majority of the county bosses have seen light in the former Prime Minister.

"I am excited to be here, and majority of us governors have decided to support Raila as the fifth president under Azimio. I consulted with Makueni on Thursday, and they gave me a go ahead to support Azimio under Muungano party. I will resume my presidential candidature in future," said the second term governor.

He went on to state that Kenyans should support Raila since he has been through a lot fighting for the devolution, democracy and freedom of the country, recounting the years the AU envoy was jailed. 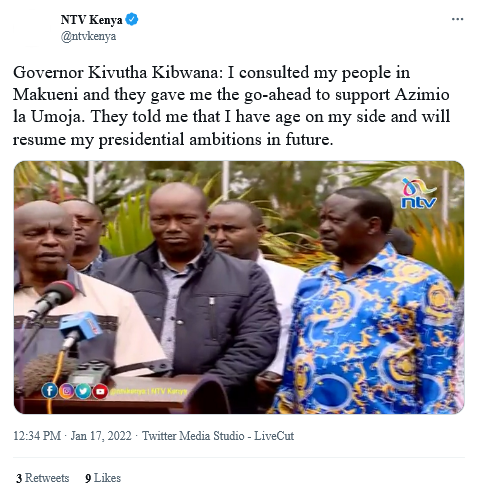 Ruto-Gachagua Holds Karatina To Standstill While Raila Camps in Kilgoris

Kenyans React To Makau Mutua's Tweet After Posting This Photo.

Ruto is surprised by the large crowd during the Narok rally.

Junet Head On With Ruto, Sends This Powerful Message Over His Attack On Martha Karua