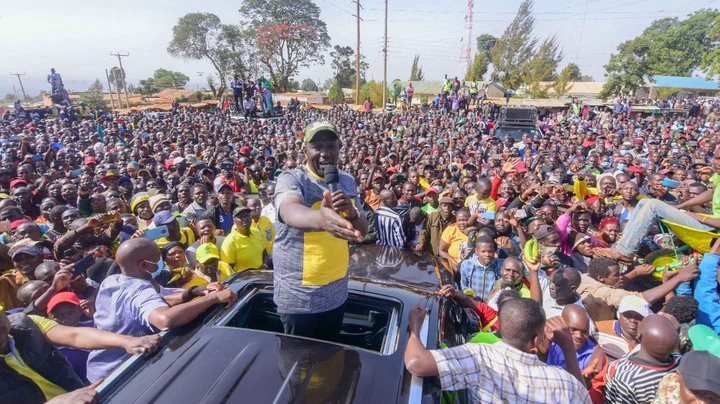 Deputy President William Ruto held his second joint rally with the leaders of the African National Congress and Ford Kenya in Bungoma. The DP outlined his plan for the large western area, informing the populace that his government would prioritize economic recovery and citizen well-being.

At the gathering, Ruto also chastised ODM leader Raila Odinga for bragging about his newfound influence as a result of his relationship with Mudavadi and Wetangula.

He stated that Raila had the pleasure of having the duo beside Kalonzo during the previous election but was unable to beat him. Raila said Raila will need "more than a miracle" to defeat him now that he has the backing of Western.

Additionally, the DP refuted accusations that Odinga would win power through the use of the deep state. He emphasized that as Deputy President and having won elections twice with Kenyatta as the presidential candidate, he is well aware of the Deep State.

He seems to imply that when it comes to concerns about the Deep State or the System, he would benefit from them, having "made Uhuru president twice."

They are urgently attempting to convince us that the deep state and the system will assist them in capturing the presidency. I'd like to ask you a question: Am I not Kenya's Deputy President? Have I not accelerated Mr. Kenyatta's ascension to the presidency? " He struck a pose.

As a result, is there any hidden state that I am unaware of? Is there any system that I am unfamiliar with? We will defeat these individuals in the morning, and they will have no recourse. They will take no action, "he continued exuberantly.