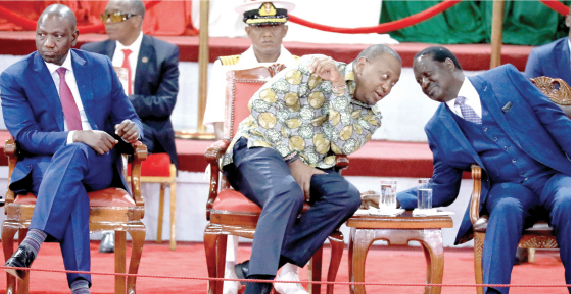 Speaking during a rally in Shinyalu, Kakamega County, on Sunday (today) the former Opposition Chief dismissed claims by the DP as unfounded.

Raila further added that if indeed there was anyone whose campaign funds needed to be probation, then it should be the DP, who according to the ex-Prime Minister, uses more than he earns.

"He despite making only Ksh2 million a month, he splashes nearly Ksh100 million in campaigns, yet he comes out here blubbering and trying to point a finger at others and especially me. Rubbish!" stated furious Raila Odinga.

He argued that the DP was the one using public funds to finance his political campaigns nationwide and dishing out money from sources he cannot explain.

Raila's sentiments come barely a day after Ruto, while in a rally in Mombasa, pointed an accusing finger to the Head of State for allegedly using Ksh1 billion to win back members who had ditched Jubilee party.

Taking a swipe at his boss, the United Democratic Alliance (UDA) presidential aspirant claimed that Uhuru was more interested in restoring the face of Jubilee instead of paying attention to more pressing issues such as hunger and drought, which has threatened millions of lives.

The remarks by Ruto further worsened the already strained relationship between him and his boss. On his part, President Kenyatta slammed his deputy for plotting his ouster behind his back.

Kenyatta revealed that to Kikuyu elders on Saturday (yesterday) during a meeting held at the State house.