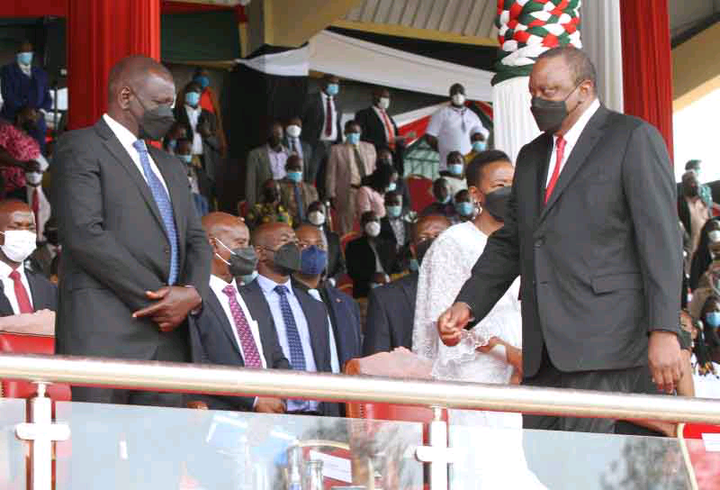 Deputy President William Ruto thinks he is ahead of his opponent in gaining the hearts of Mt Kenya voters, citing key lessons gained from President Uhuru Kenyatta on their wishes and aspirations.

He was speaking at the Latter Glory Worship Center in Kiambaa, Kiambu County when he gave a personal donation of Sh1 million to the church.

President Uhuru Kenyatta, according to Ruto, has already taught him how to climb Mount Kenya, whereas his opponents are struggling to persuade Kenyans to vote for them.

"Many people are attempting to climb the mountain, but I am lucky in that my buddy Uhuru Kenyatta showed me how to climb it at a young age." "If you want to be with the people of the mountain, take care of their needs like roads, water, and agriculture," Ruto said today in Kiambu.

On the other side, he counseled Kenyans to renounce ethnic groups in favor of political organizations with a national perspective and goals.

The Hustler Movement, he claims, intends to alter the country's economic paradigm from the ground up, rather than the current top-down approach, which favors only a few people.

"We believe in teamwork, and I'm pleased to be a part of the Hustler movement as a member and leader," Ruto added. "We want to leverage our unity to construct a political party capable of formulating a proper development plan based on a bottom-up economic model that will alter our country's destiny."

When Ruto addressed Sunday at Gachie's Latter Glory Worship Centre, he said Kenyans should elect leaders with a proven track record and who have the country's best interests at heart.

According to the Deputy President, only the United Democratic Alliance (UDA) among the current crop of political parties has a national perspective and a clear aim for the country.

"Do not be fooled into supporting political groupings with tribal ties but no development goals," the Deputy President said.

The MPs, led by Muranga Senator Irunga Kang'ata, said that the government belongs to all Kenyans, regardless of who wins next year's elections.

"It doesn't matter where you're from, whether you're from the Coast, Nyanza, Mount Kenya, or the North Eastern, the government belongs to all Kenyans," Kangata remarked.

A Kikuyu MP, Kimani Ichungwa, urged the youth to exhibit political tolerance and refrain from using hate speech in politics.

Ichungwa condemned Saturday's violence in Busia, which occurred when DP Ruto was visiting the region.

He urged all political leaders to practice political tolerance and rein in supporters who attempt to harm their opponents with violence. Thank you for reading like, share and following for more articles.