Following the surprise decision by President William Ruto to work with COTU Secretary General Francis Atwoli, political analyst Mutahi Ngunyi issued a warning to Kenyans and political figures recommending them to use great caution when dealing with the Vice President. 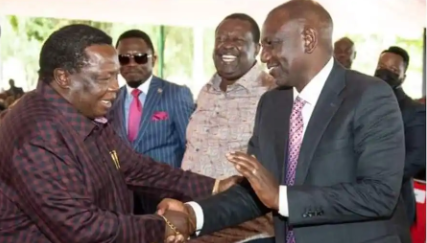 As a result of their political differences, Ngunyi claimed that Ruto apologized to Atwoli in front of Atwoli after being wronged by him. This was noted by Ngunyi. The analyst said that if Ruto's code of conduct is to be seen as an illustration of statesmanship, it should be evaluated very carefully.

According to political analyst Ngunyi, who thinks something sinister is brewing within President Ruto's administration, it is improper for someone who has been harmed to seek out restitution or to apologize.

The fault is with Atwoli. Then again, he was excused. Statemanship is what that is. Ngunyi posted on his Facebook page, "Let us take the time to study manruto."

Atwoli made it official to refer to Ruto as "a young man who cannot do anything" during the tenure of former President Uhuru Kenyatta. This included winning the most recent presidential election. Even now, people still follow this custom. The COTU Secretary General had been expecting Ruto's defeat up until that point, but it wasn't until the very last moment that he was declared the election's victor.

A few weeks later, Atwoli congratulated Ruto in front of the public before joining him in the State House for an hour-long private meeting. Atwoli claims that during the discussion, they spoke about the employment of the unemployed citizen and the welfare of the workers. An hour was spent in the meeting.

Kenyans have reacted to the abruptness of the decision in a variety of ways, and a political specialist by the name of Ngunyi has claimed that Ruto's actions require detailed check.