A thunderous moment was witnessed among the huge crowd of Raila Odinga supporters. Who had turned out in large numbers to grace his tour in Matisi, Transnzoia County.

When veteran western politician, Noah Wekesa revisited a prophecy made by the famous prophet Elijah Wanameme on the country's leadership. That seemly related to Raila's Odinga yet to be declared presidential quest.Which allegedly should come to pass.

According to the prophecy as said by Noah Wekesa in relation to the 2022 statehouse bid. Kenyans should expect a leader coming from the lakeside.

Hence, Raila may become Kenya's fifth President, should Wanameme's prophecy come to pass.Given that he is the only leader hailing from the lake region with a presidential aspiration.

'Ovwami vulalurira emachi," Noah Wekesa said. Which can be loosely translated as, "leadership will come from the lake."

Further, the politician stated that after Raila clinching the top seat. The leadership mantle will then be vested upon the Luhya community. As per prophecies said by prophet Elijah Wanameme.

"Prophetic words by Elijah Wanameme are yet to come to pass. That is why we are now supporting baba. Later after Raila, the leadership mantle will be back to the Luhya community." 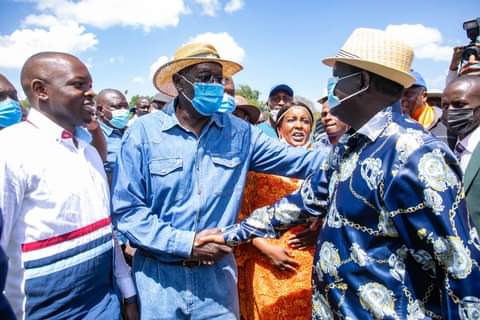 Please click to watch the video on this link. As premiered via Raila's Facebook page. The scene unfolds from 15.00 minutes.

What is your take. Please share your hilarious thoughts.