The Day Ruto Took Over From Uhuru For 72 Hours

By NewsArena (self media writer) | 17 days ago 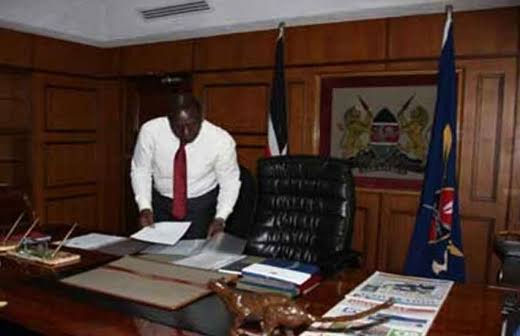 Ruto has been accused of launching his campaigns to statehouse soon after the 2017 general election that elected Uhuru for a second term as president. He has been perceived as a man willing to sweat and be rained on (literally, like in Kisii) to occupy the house on the hill.

His boss, President Uhuru links his early campaigns to the reason why he is annoyed with him. Notwithstanding the notion that DP Ruto abandoned tasks given to him by his boss and chatted his own path for the sake of his ambitions.

Well, Ruto once sat on the throne. And maybe he knows how sweet it feels to be the Grandmaster. It was in 2014 when the relationship between Uhuru and Ruto was at its finest. The president had gone to the Hague to defend himself after being accused of crimes against humanity.

Uhuru invoked article 147 of the constitution and handed over power to his deputy until his return from the Netherlands. In his argument, the president did not want to impose his personal crimes on the country.

A fleet of limousines, Recce squad officers, National Intelligence Unit, and the Harambee House presidential office were all delegated to the deputy. In three days, Ruto enjoyed full state power and privileges that can only be compared to the day Kenyatta died and Moi took over as acting president for 90 days. As he walked down to the presidential office, Ruto wore the best of smiles and had the infamous white shirt and red tie they always wore with the president.

Ruto took over Uhuru's office at Harambee House and sat on his chair planning on how to run the country as the head of state.

It is the same seat Dr William Ruto is fighting to get back to, only for a longer duration of 5 or 10 years.