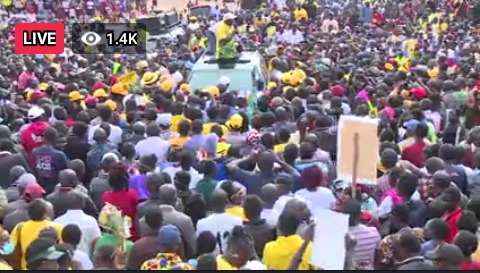 The deputy president William Samoei Ruto's west pokot County tour was successful after he received a warm reception in several areas including Sigor, Chepareria. Ruto was not welcomed by the area governor Hon. Lonyangapuo who vowed to support Hon. Raila Amollo Odinga.

Ruto's grand reception shows a lot and we can clearly see why he didn't needed the support of the area top leaders for his campaigns to be accepted in the area. Here are the reasons why Ruto's today's campaign in West Pokot county was peaceful and successful:

1.Focusing More on Common Citizens priorities Other Than fighting For Political Supremacy.

The deputy president has been fighting for citizens interests and advocating for youths and women empowerment. Ruto has been focusing on creation of permanent jobs for the youths and not chasing leaders who value self interest. This have been earning him much praise and so acceptable to the common people making his campaigns easier.

2.Understanding Political Grounds And Knowing How to Encounter The Opposing Side.

Ruto clearly told the residents in Pokot county that he understands the stands of their area Governor and that can't limit him because they are not fighting for political supremacy. Humbled Ruto's language created much peace between his supporters and his opposition side. He said that everyone has the right to join any party, support his preferred candidate. Ruto seems to be a political genius and he knows how to deal with his critics.

3.His Stand For Peace And Preaching The Gospel of Oneness Ahead of The poll.

Ruto first statements in West Pokot was all advocating for peace as he clearly knew the different political sides in the county and telling the citizens to maintain peace was a good step to enhance his campaigns in the region. His supporters and his critics could not fight due to political differences.