By Sackonews.com (self media writer) | 4 months ago 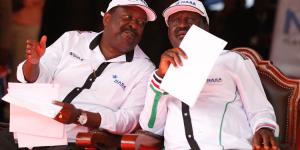 Malala wants Raila, the Orange Democratic Movement (ODM) party leader, to step down and back Mudavadi. Raila formed the Azimio la Umoja movement which is seeking the support of other parties such as ANC, a member of the One Kenya Alliance.

Speaking during an interview on January 17, the vocal legislator noted that Mudavadi had sacrificed a lot for Raila who then needed to return the favour.

Malala explained that the ANC party was keen on the presidency, adding that they can only work with Raila's Azimio la Umoja movement if they endorse Musalia as their flagbearer.

"Although we are open for discussions, the bigwigs in Azimio should be ready to support Musalia for us to join them.

"Musalia has helped Raila many times and it's imperative for Azimio and the former Prime Minister to back him. That is our bare minimum," Malala remarked.

He added that they have been betrayed by Raila before and thus will not let their guard down if they agree to work with him.

However, the Senator noted that the party will settle for any government position if Mudavadi joins hands with Deputy President William Ruto.

Malal explained that Ruto, unlike Raila has never reneged on his promises and this enticed Mudavadi's team to join the DP's bandwagon.

"If we go to the negotiating table with Azimio, we'll be very keen. In the past, Musalia has worked with leaders who waver on their decisions. This time around, no one is going to take advantage of our party leader," he added.

Analysts argued that Malala's sentiments opined that Mudavadi was warming up to Ruto more than Raila as seen by how high the set the bar for the former Prime Minister than the DP.

It's not the first time that Malala has sparked speculations on the future of the One Kenya Alliance (OKA) and the possibility of the Mudadvadi joining the DP’s camp.

A few days later, on January 8, 2022, Malala appeared at a rally convened by Ruto at Eldoret Sports Club forcing the master of ceremony to change the program to have him address the gathering.

Below is the video;