By Kelvinmburu254 (self media writer) | 1 month ago

The High Court of Kenya has on Thursday October 6, 2022 upheld the jail term of John Waluke and his accomplice Grace Sarapay Wakhungu. 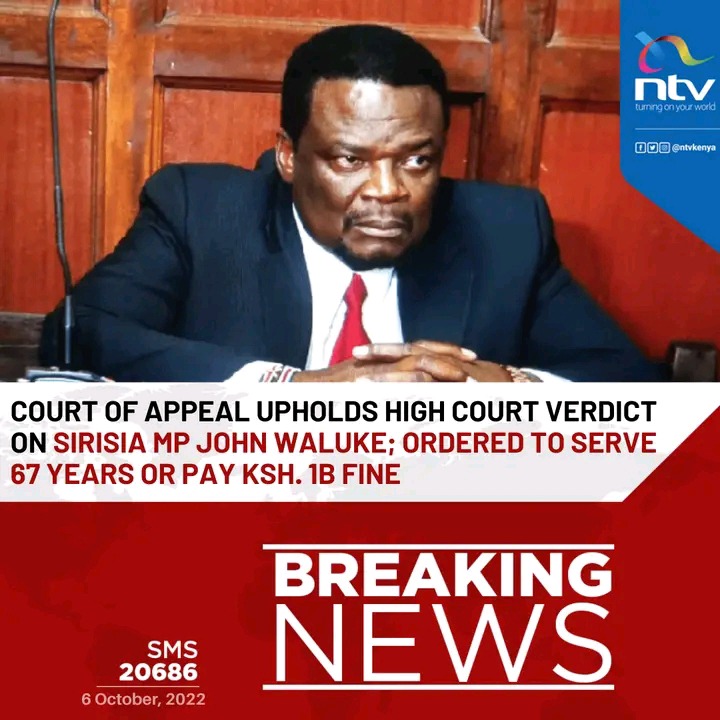 Sirisia MP John Waluke has been sentenced to 67 years in prison or pay a Ksh 1 billion fine by High Court Judge Esther Maina for fraudulently obtaining more than Sh300 million from NCPB.

Waluke is charged alongside Grace Wakhungu, a co-director with Waluke at Erad Supplies and General Contractors Ltd, the entity involved in the agreement.

Both have five counts against them. In count one, Waluke and Wakhungu are charged, along with Erad Supplies and General Contracts Limited, with knowingly and fraudulently uttering a false invoice for the sum of USD 1,146,000 and National Cereals and Produce Board purporting it to be an invoice to support a claim for costs of storage of 40,000 metric tonnes of white maize on or about the 24th day of February, 2009.

In Count two, Grace Wakhungu was charged with perjury for willfully providing false evidence for claims for maize storage fees in an arbitration dispute between Erad Supplies and General Contracts Limited and National Cereals and Produce Board.

Waluke and Wakhungu are also charged, along with Erad Supplies and General Contracts Limited, with jointly and fraudulently acquiring public property in the amount of Ksh 297,386,505, purportedly for storage charges of 40,000 metric tonnes of white maize. They are also accused of acquiring another public property to wit, Ksh 13,364,671 purporting to be costs of similar purpose of storage.

They are also accused of jointly and fraudulently acquiring public property, specifically USD 24,032,000 supposedly incurred by Chelsea Freight for the storage of the maize, as well as loss of earnings and interest.

The two entered not guilty pleas, and the prosecution brought a total of 27 witnesses in an attempt to support its case. After hearing their defense, the trial court issued its judgment on June 22, 2020, in which Waluke appealed.

The magistrate determined that the Director of Public Prosecutions had established that the duo had obtained taxpayer funds from NCPB illegally.