By Joya (self media writer) | 3 months ago 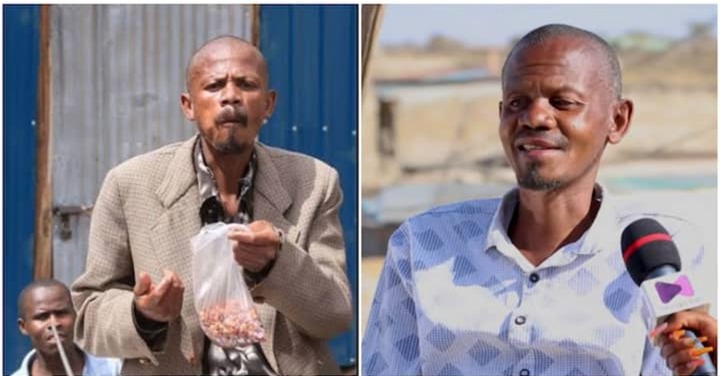 Sometime back , one Martin Kamotho Njenga alias Githeri man became an internet sensation when pictures of him went viral eating the local delicacy from a transparent polythene bag during the campaign and voting period.The father of one went viral and people he did not recognize were looking for him all over until he had to hide in his aunt's home for awhile .Out of fear , he resolved that if they had to take him then it should be from his aunt's home for at least a family member would know who took him .

Githeri man goes on to reveal how he tasted fame and had schedules for interviews in almost all TV stations in the country which he honoured.However , the question still is ,where has githeri man been all along? The man reveals how he has been working for Nairobi City Council all along.He has been quick to reveal that ,fame didn't bring much his way other than the lunch the president offered him at State House Nairobi and the few handouts people offered him whenever they met .He also said that a certain company promised him a 2 year supply of suits which they have been doing.

Githeri man also revealed that companies like Chandaria ,those that make biscuits, salt ,never honoured their promises to him of supporting him financially and has never even met the owners . However , some netizens have been quick to blame Githeri man's uncontrollable thirst for alcohol as the reason as to why most companies chickened out of their promises . Githeri man was seen drunk barely seven months after leaving Mama Care Rehab Centre.He could be seen so drunk that people would be carrying him in a cart . Whatever might have happened is unfortunate but gaining sobriety as an individual would be a big first step for Githeri man .

Content created and supplied by: Joya (via Opera News )