By liteimike (self meida writer) | 11 days

Kabuchai MP Majimbo Kalasinga declared war on Bungoma governor Wycliffe Wangamati on Saturday after his bodyguard was brutalized during a funeral in the village of Kimalewa. 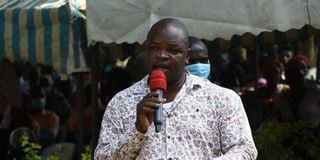 Mr Kalasigna said that without his intervention the incident would have escalated and caused many casualties.

He linked Governor Wangamati to the incident, but the county chief denied the allegations through Bungoma County Communications Director Tim Machi.

Speaking at Chwele market on Saturday, Kalasinga said hired henchmen were being used to intimidate critics of the Bungoma County government.

“I am shocked by the hooliganism. I assure him (Governor Wangamati) that we will face each other, ”said the Ford Kenya MP.

Mr. Kalasinga recounted an incident in Kimilili, where a supporter of the governor clashed with MP Didmus Barasa.

He said he couldn't let this happen to him and claimed he reported the incident to the governor but no action was taken.

“The war between Wangamati and me has officially started,” he said. "The governor failed to deliver."

Mr. Wangamati faced strong opposition from all eight Bungoma lawmakers and a branch of the MCA, with less than 13 months of the 2022 general election.

Mount Elgon MP Fred Kapondi, Tongaren MP Eseli Simiyu and Kanduyi MP Wamunyinyi Wafula are the only MPs to support the governor's first term, who fell out with Bungoma Senator Moses Wetangula after the failed Ford Kenya party coup that caused a sensation.

Mr. Wangamati was not immediately available to comment on the allegations.

However, the county communications boss said Mr. Kalasinga should get over the “excitement” of being an MP and focus on serving the people who elected him.

“He must be reminded that after the electoral victory comes hard work and the realization that it is not possible to meet the expectations of all those who supported him. When that happens and he loses some of his old supporters, he shouldn't blame the others. To do so is an act of extreme cowardice.

Mr. Machi also noted that the governor and the deputy were both elected by the people.

“He should stop the threats because he has no more rights over Kabuchai than the governor. He has to become a leader, ”he said, noting that“ the governor has no henchman and never thought of having one ”.

He also advised Mr. Kalasinga to file a complaint with the police so that appropriate action could be taken.

Content created and supplied by: liteimike (via Opera News )

Rundown Of MPs Who Hold Only KCSE Certificates

Could Ruto Be 'Poaching' These Powerful Politicians Ahead Of 2022?

"Raila Has Lost Support In The Western Region, Western People May Vote For Ruto" Rashid Echesa

"We Must Be Part Of Ruto's Government," Western Kenya Leader Says