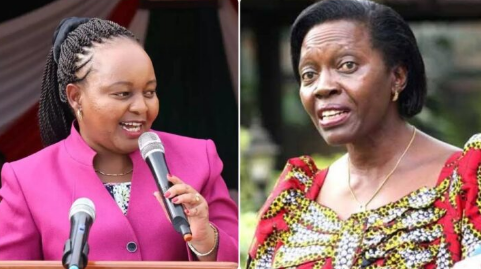 Kirinyaga Governor Anne Waiguru has urged her 2017 close competitor Martha Karua to stick to the National Politics after she was unanimously chosen by members of the Mount Kenya Unity Forum a day ago to be their spokesperson.

Addressing a section of the residents on Wednesday, Waiguru claimed that the residents of Kirinyaga know who they will elect next year, dismissing Karua's gubernatorial interest.

In several past interviews, Karua has failed to 'recognize' Waiguru as her governor, alleging that she won the post but was rigged out despite the Supreme Court upholding Waiguru's victory.

The two female politicians have been dragged in to the list of possible running mates for a number of presidential aspirants, although they have dismissed the reports stating that they have not been consulted on the same.

Almost a week ago, Waiguru stated that she was listening to the residents, and was going to join the party that her constituents will advice her.

Today, in a video that has since gone viral, Waiguru hinted of joining UDA after the constituents stated they will re-elect her under the nine-month old party. Big Win For Ruto As Waiguru And Over 20 MCA's From 'Kieleweke' Joins UDA, Currently At Karen