The Independent Electoral and Boundaries Commission has seven commissioners who run the commission and ensure that whatever is needed in the country as far as elections are concerned, is done in its proper way.

The seven commissioners yesterday showed Kenyans a side that many hadn't expected would happen as per the reports that we have given that four of them recused themselves from the results that were to be announced by Independent Electoral and Boundaries Commission Chairman, Wafula Chebukati.

Led by the the Vice Chairperson of the Independent Electoral and Boundaries Commission, Juliana Cherera, the four have said made another statement this afternoon relating to yesterday's results.

According to the reliable reports that we have this afternoon from the four Commissioners, Juliana Cherera has said that they have remained faithful to their oath of office and shall continue to keep doing so.

She has also stated that they will not take ownership of the presidential results that were announced by IEBC Chairman Wafula Chebukati yesterday.

She has gone on to further allege that the total votes exceeded the 100% mark, the 0.01% translates to about 142,000 votes which made a significant difference in the final presidential results announced by Wafula Chebukati yesterday.

Juliana Cherera has thus stated that they concluded that the process which went into the generation of the Presidential Form 34C was not clear to them.

The four have stated that the announcement that was made by IEBC Chairman, Wafula Chebukati did not represent that of the Commission but for himself only. 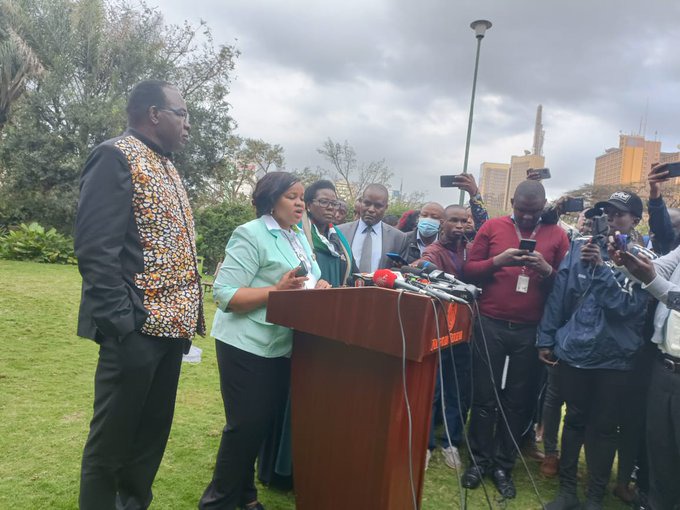 Picture courtesy. The four IEBC Commissioners at the Presser.

Cs Matiang'i Achievements Which Will Be Remembered By Many Kenyans

Special Envoys from US, UN, AU to Land in Nairobi

Relief as Price Of Cement Reduces By Over Ksh 300