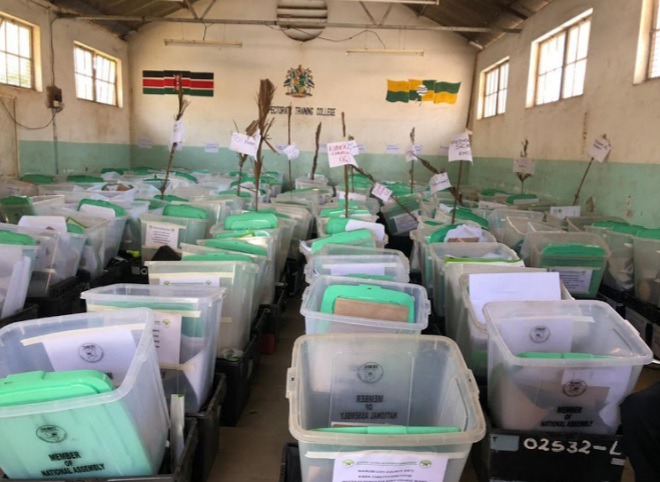 IEBC ballot boxes on display during a past by-election.

Mixed reactions have greeted an attempt to change the law to prevent corruption suspects from being allowed to participate in elections once officially charged.

While some lawmakers and experts argue that this is the spirit of the Constitution, others felt that the amendments proposed by Ugunja MP Opiyo Wandayi would be difficult to implement.

Wandayi is seeking to amend the Leadership and Integrity Law and the Election Law to require corruption suspects to step aside and cease performing their duties.

"A state official who is formally indicted by a court for a corruption-related offense must cease performing the functions of his office pending the finalization of the case in court," the proposal said.

Wandayi told reporters in the Parliament buildings that the Speaker of the National Assembly, Justin Muturi, had authorized the proposal to proceed to the budget committee.

From the Budget Committee, as this is not a money bill, it will be subject to pre-publication review for further processing by the Justice and Legal Affairs Committee .

"We want to make sure that this law gives effect not only to the letter of chapter six, but also to the spirit of the Constitution," said Ugunja MP.

In his speech, the MP argued that it made no sense that the court order barred suspects from taking office when a concerned governor can sit in his booth and chair a cabinet meeting.

The chairman of the Public Accounts Committee argued that those accused of corruption use their positions to entrench corruption, making it appear part of the national culture.

“The best way to stop corruption in Kenya is to stop those suspected of stealing from the public. We have to remove them before they are elected if they contest a seat, ”he said.

On the jargon of being innocent until proven guilty, the ODM political affairs secretary said suspects should stay away until proven innocent, then can claim damages and interest.

Ndaragwa MP Jeremiah Kioni supported the proposal, saying it reflects the spirit of the constitution. He said the courts had lowered the bar and allowed the theft of public resources.

“The drafters wanted that when someone is charged, they should not be allowed to run for office. It will be the ultimate killer of corruption. Kenya would experience a major transformation overnight, ”said Kioni, chair of the Constitutional Implementation Oversight Committee.

However, there are signs that the bill could navigate uncharted waters according to the sentiments of various experts and lawmakers.

Homa Bay Township MP Peter Kaluma argued that section 50 of the constitution presumes all suspects are innocent until convicted and sentenced.

“The courts confirmed this position when President Kenyatta and DP William Ruto were allowed to run for office in 2013. The proposal to ban suspects, whether of corruption or otherwise, is therefore street speech without a legal basis, ”Kaluma said.

Constitutional lawyer Bobby Mkangi said the proposal would be effective in an independent and fair criminal justice system.

“The missing link is an objective, free and fair criminal justice system where everyone can be happy to be convinced that by the time one is brought to the dock there is a good deal that is not not political, ”he said.

The lawyer argued that the criminal justice system should be fixed by, for example, setting a specific deadline for cases to be heard.

But lawmaker named David Sankok said the law could be subject to abuse by people wanting to bar their rivals from participating in any election.

“We're literally going to lock everyone up. This is a proposal that may not see the light of day due to the complexities it would have to present, ”he said.

He felt it would be easy to enforce the law once convicted by a competent court, adding that Kenyans should not accept the laws of the jungle.

“We can reduce the timeline for all corruption cases, as we have done with petitions challenging a presidential election,” Sankok said.

But Wandayi argued that it would be counterproductive to use a simplistic reading of Article 99 of the Constitution to oppose the law.

The PAC president argued that Article 259 of the Supreme Law states that the same must be interpreted in a way that contributes to good governance.

“You don't pick a section and read selectively,” he said.

He argued that the spirit of the law provides that a person is eligible if the person, among others, meets educational, moral and ethical requirements.