Few days after court made a ruling in favour of a section of the Democratic Party officials, against Justin Muturi's move to sign a coalition pact with Kenya Kwanza Alliance, that is led by Deputy President William Ruto, the party has now called upon the officials who aided the signing to resign from the party as soon as possible.

According to a report by KTN News on Saturday, the party now wants Muturi who was the DP's party leader, the patron Joseph Munyao, the party's chairman Esau Kioni and the secretary general Jacob Hajji to resign from the party's leadership.

The party argued that the four leaders have been accused of gross misconduct within the party, saying that the political outfit had agreed during its National Delegates Conference that they will only have a coalition agreement post the August polls.

"We stand with our earlier remarks that we can only enter in to an election cooperation after August elections. Any other pact before then is null and void," said one of the officials.

Since the signing of Democratic Party and the Kenya Kwanza Alliance deal on April 9, Muturi has accompanied Ruto to a number of economic forums, political meetings and rallies where he drummed up his support for Ruto's presidential bid, saying that he had toured different parts of the country and most Kenyans had advised him to join hands with the UDA party leader. 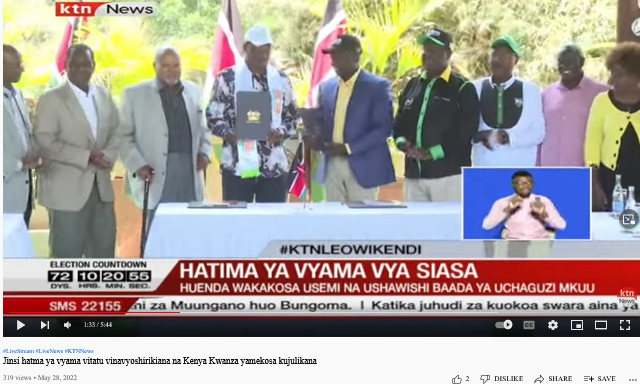 How To Win My Girlfriend Back

Crazy Things Ladies Do When They Are Desperately In Love