We're now remaining with only 7 days remaining before we go into August General election, and campaign rally in the country have intensified, allowing many politicians to hunt for votes from the kenyans.

However, another story that have come out from Kenya Kwanza Alliance, is about March 9, 2018 Handshake between Raila Odinga and Uhuru Kenyatta. The move by Uhuru to settle the score with his political nemesis, Raila Odinga, seem not to have pleased some politicians.

President Uhuru Kenyatta has been chastised by National Assembly Speaker Justin Muturi for lying about the true intention of his handshake with Azimio presidential candidate Raila Odinga. 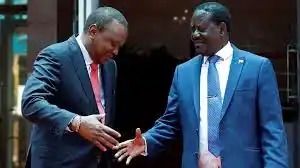 Muturi stated during a Kenya Kwanza campaign rally in Lamu on Sunday that the handshake was originally intended to promote peace.

Accompanied by UDA running mate Rigathi Gachagua and Marakwet Senator Kipchumba Murkomen, he stated that there was never any discussion about turning the handshake into a political alliance.

Muturi expressed disappointment that the president ended up endorsing Raila for president.

"He claimed they had a cup of tea with Raila to discuss peace, but then came back and asked us to vote for Raila simply because he had endorsed him." "I told him that wasn't going to happen," Muturi said. 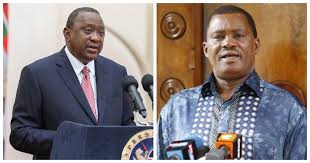 Muturi urged Lamu voters to vote en masse for Kenya Kwanza in order to teach the President a lesson.

"Do not be duped as we were. Only a Ruto presidency has the potential to save this country. "I am urging you to vote for William Ruto as the fifth president in large numbers," he said.

Kenya Kwanza, according to Gachagua, will not encourage a similar handshake agreement because they believe Ruto will win the elections in the first round.He warned Raila to be prepared to accept defeat if he lost.

Gachagua urged residents to vote in a six-part pattern for Kenya Kwanza-affiliated candidates, allowing Ruto to form a strong government.

Why Raila Was Not Informed About His Mother's Death