Wandayi Now Claim Why Azimio Did Not Protect 'Cherera 4' in Parliament, Comments on Planned Protests 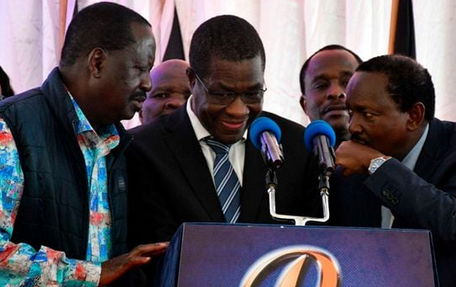 Cherera, and commissioners Irene Masit, Justus Nyang'aya and Francis Wanderi failed to appear before the Justice and Legal Affairs Committee (JLAC) to respond to 4 petitions that sought their ouster, with JLAC proposing their suspension.

The report was taken to the floor of the house where the MPs approved it called upon the committee to urge President William Ruto to form a tribunal that will probe the 4 on accusations of trying to subvert the will of Kenyans by distancing themselves from Ruto's win.

As reported by the Star, Wandayi who was speaking in his constituency yesterday claimed that they did not protect the commissioners due to alleged biasness.

He added that the Azimio camp will be presenting their case to the people through planned rallies on December 7th and 12th at Kamkunji Grounds as it was announced yesterday by the Orange Democratic Movement boss Raila Odinga.

"We are taking the issues to the people so that they can have a say on the same. The public meetings will be held on December 7th and also 12th at Kamkunji grounds in Nairobi."