The August General Elections has come and gone with 14 million Kenyans coming out to vote in the just concluded tallying that was conducted by the Independent Electoral and Boundaries Commission.

The Deputy President of Kenya, William Ruto was declared the President Elect by the Independent Electoral and Boundaries Commission Chairman, Wafula Chebukati at The Bomas of Kenya.

Former Prime Minister, Raila Odinga, did not make any appearance at the Bomas of Kenya and has not been seen in public since yesterday when the results was announced as per the reports that we have.

This afternoon, the Former Prime Minister Raila Odinga, has appeared before the media at the Kenyatta International Conference Center in Nairobi County where he has issued a statement.

Raila Odinga has said that the constitution and the laws of the land are clear about how the Independent Electoral and Boundaries Commission should conduct their business.

Raila Odinga said that yesterday on the August 15th, the democracy of Kenya suffered a major setback as a result of this, Kenya faces a political crisis as a result of the actions of IEBC Chairman, Wafula Chebukati.

The Former Prime Minister, Raila Odinga, has announced that they do not acknowledge the presidency of William Ruto and thus, to them, the results are null and void.

The Azimio la Umoja One Kenya Alliance leader has said that they will be heading to court while urging his supporters to remain calm as they head to the Supreme Court to find a way ahead.

He has said that they are certain that they will be victors in the court and has commended the four Independent Electoral and Boundaries Commission Commissioners for their stand. 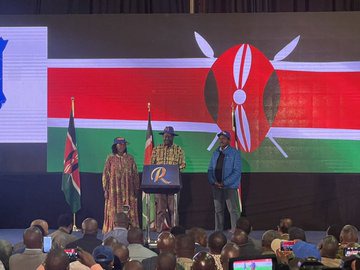 Kenyans React as Details Emerge Where President Ruto Will be on 24th and 25th September.