LSK Boss Takes A Swipe At Uhuru's Government, Revealing The "Sins" He Has Committed

By @queenyA (self media writer) | 1 month ago

His Excellency President Uhuru Kenyatta awoke to alarming news today as the Law Society of Kenya (LSK), through its president Nelson Havi, launched an attack on Parliament.

LSK president Nelson Havi claimed on Twitter that President Uhuru Kenyatta's Parliament has continued to operate unconstitutionally after refusing to heed the previous Chief Justice's advice on dissolving the legislature.

According to Nelson Havi, the former CJ David Maraga advised President Uhuru Kenyatta to dissolve Parliament last year. He then went on to accuse Parliament of being unconstitutional for continuing to raise taxes and for passing the Building Bridges Initiative, which he believes is illegal.

"On this day last year, Chief Justice David Maraga advised President Uhuru Kenyatta to dissolve Parliament. The unconstitutional Parliament continues in being. It has increased taxes, refused to reduce interest on HELB and passed BBI Bill amongst many other wrongs on Kenyans." The statement says. 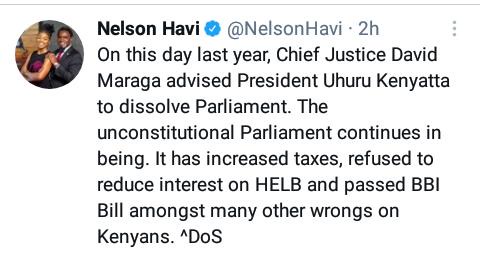 This has raised many concerns and reactions from Kenyans.