Gov. Rasanga Fires Back As ODM MP Launches Attacks On Him Over His 2022 Bid

By NewInKenya (self media writer) | 9 months ago

Alego Usonga Constituency member of parliament Hon. Sam Atandi has hit at Siaya governor Colonel Rasanga for eying his seat in 2022. The vibrant member of parliament has told the governor to shelve the ambition and focus on national politics, he challenged the governor to imitate the likes of governor Wycliffe Oparanya and Joho who have since focused on national politics and are ready to fight for Raila to clinch the Presidency. 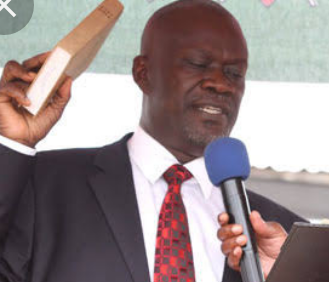 "I would urge you to go and help Raila to campaign for Presidency just like Kakamega governor Wycliffe Oparanya has opted to do. Don't fall for people's lives asking you to compete with me" he was quoted by a local publication.

Rasanga however asked Atandi to focus on seeking voted to defend his seat, he said he will not be forced to make a decision. "It is upon the people of Alego to decide who is their next member of parliament. If they feel I have done the best with the governor position and that I can represent them in Parliament, then that is it" the vocal governor stated.

The governor reportedly got an endorsement of Kakan elders who asked him to go for the seat, he had hosted the elders at his home over the weekend.

He is serving his second and last term as the county's boss, he was first elected in 2013 and defended his seat in 2017, Rasanga feels that he is still young to retire from active politics. It will be interesting to watch the battle in Raila's home turf especially during party primaries. 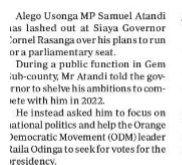 Laikipia Governor's Race: A Two-Horse Race, Who is Better Between The Two?