By RIFT.VALLEY.NEWS (self media writer) | 1 year ago 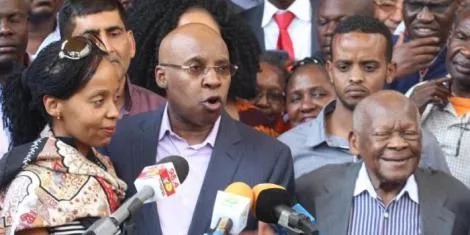 Billionaire Jimmy Wanjigi on Wednesday, June 16, formally announced that he would be vying for the top seat come 2022.

Wanjigi, who has been a silent actor in Kenya's politics, confirmed that he would be in active and would not play the role of a King maker anymore.

A section of activists argued that it was a matter of time before Wanjigi declared his interest in the Kenyan politics following that his father, Maina Wanjigi, was a renowned politician.

"Maybe the time has come to say, what I can do for other people, I can also do it for myself and he comes from a political family. His father was a politician for a long time, an MP for Kamukunji and CS," political analyst Barack Muluka Said.

"Once you have politics in the family, people will always want to come out and try," he added.

His declaration might influence the nature of coalitions that will be formed come 2022 and to clinch the seat, the businessman is banking on several factors including;

The billionaire, who has a knack for flying under the radar, has previously been suspected of bankrolling some of the top politicians in the Country.

He is also said to have funded the Uhuru and Ruto government in 2013.

It is clear that the businessman will, therefore, be able to fund his own campaign, being one of those considered as old money billionaires.

He will take a leaf from 45th US President Donald Trump, a billionaire who funded part of his own campaign from pocket.

In recent times, there has been a division in Mt Kenya politics with a section of leaders allied to Deputy President William Ruto and others to President Uhuru Kenyatta.

Wanjigi's decision to vie for the top seat, therefore, will either complicate the politics in the region or become a game changer in the 2022 elections.

It is not clear whether Wanjigi will vie on an ODM ticket as he is yet to announce his party.

Wanjigi has been a government insider since 2002 when former president Mwai Kibaki got into power. He was instrumental in connecting the grand coalition government with Chinese contractors, China Road and Bridge Corporation (CRBC).

His influence, however, remained a secret until 2017 when he revealed that the jubilee government was created in his house in 2013.

He disclosed that he hosted both Uhuru and Raila in his house, for the sake of peace in Kenya.

Wanjigi disclosed the details in a NASA press conference in 2017 after his Muthaiga mansion was raided. He accused the Jubilee government of persecuting him and his family, only because of his political belief.

Being a government insider who has been a king maker over the years, Wanjigi knows the cards to be played for him to clinch the top seat.

To be in government in 2022, the billionaire will need to partner with an influential businessman especially because he has been silent over the years.

So far, it is only Deputy President William Ruto who has declared his interest in the top seat. ODM leader Raila Odinga is yet to announce whether he will be on the ballot or not. Wanjigi has worked with both these frontrunners before.