United States of America secretary of state Hon. Anthony Blinken has finally urged Kenyans to consider maintaining peace and unity during this times of elections, since the nation is being considered as the economic powerhouse and also the image to many other states which will be undergoing the same track.

Blinken who took to twitter claimed that He took His time to discuss together with President Uhuru Kenyatta on matters concerning the elections of this nation, while He made His trip to Africa recently, since the effect that the election will bear may affect some sections of the continent, which have been directly dependent on the whole move.

He however asked Kenyans to keep the peace and calmness around the nation as the whole tallying process keeps going on, now that many African States and abroad are watching the elections closely. 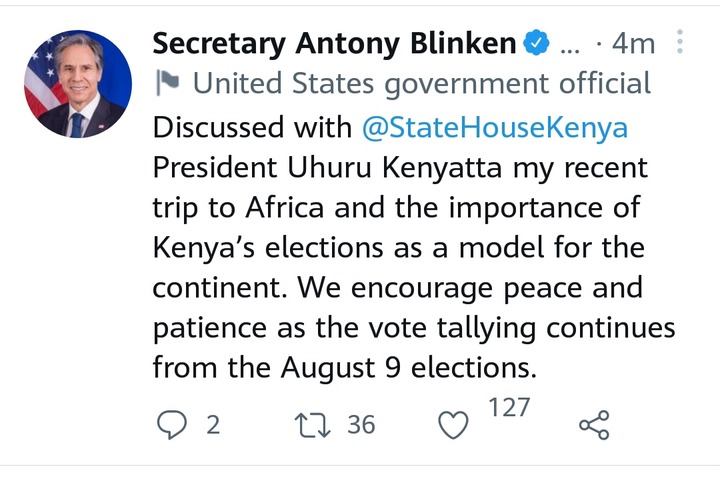 The US top ranking official visited Africa days ago in nations including South Africa and other central African countries that were part of His assignment. The trip was considered important to strengthen the relationship between the World superpower and African states Which have been working closely with them especially with matters of business, among other things.

Uhuru has been maintaining His relationship with the leaders from the foreign nation for years now since His leadership began in 2013, where the nation has been experiencing troubles that has been resolved by the US and even different aids delivered to make sure that the nation maintains its growth path.

This comes at a time when the Nation is facing a very serious time where Kenyans from both political divides have been anxious about the move to make matters slow at the Bomas of Kenya.

Raila Odinga to hold a crisis meeting in the ODM fallout

Revealed: What Azimio's chief Raila Odinga Will be Doing Today With his Allies