Opinion - Regions That Are Expected To Make Raila The 5th President

By Soccerworld (self media writer) | 4 months ago 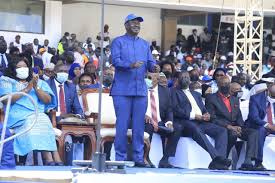 The Kenyan constitution stipulates that general elections should take place at the interval of five years, on the second Tuesday of the month of August. In line with that provision, Kenya is going to hold general elections on 9th August 2022 in all the six elective seats of president, governors, senators, women representatives, members of parliament and members of county assemblies.

A firce competition is expected to take place in the race to succed president Uhuru Kenyatta especially among the two horses; Orange Democratic Movement party leader Baba Raila Odinga and deputy president William Ruto. For today we take a close look at the regions that are likely to make Raila Odinga the fifth president;

It is the most populated regions in the country with close to 40 percent of voting population with president Uhuru's support for Raila Odinga, the region has for the first time warmed up to support Raila in the August elections thus this will earn him victory.

Made up of Kisii, Nyamira, Siaya, Homabay, Migori and Kisumu; The Nyanza region has been Raila's stronghold over the years and we expect the same this year.

It is made up of the second popularous tribe, Luhya in the four counties of Kakamega, Bungoma, Vihiga and Busia. Even when their own Musalia Mudavadi was in the ballot, the Western region voted for Raila enourmously thus they will be key in giving Raila a win.

It has the counties of Machakos, Kitui and Makueni all having more than two million registered voters. The three governors from the region have endorsed Raila and they will help deliver votes to him as pressure is mounted on Kalonzo Musyoka to support Raila.

The region has been supporting Raila Odinga overwhelmly and nothing is expected to change this August.

Content created and supplied by: Soccerworld (via Opera News )

The Flu Experienced Throughout Kenya Explained By Medics