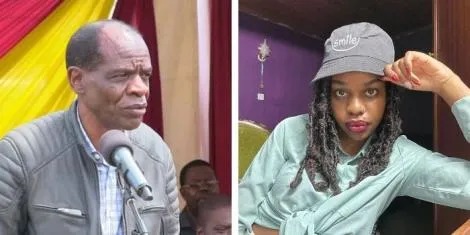 “I grew up knowing my parents are rich," Michelle Serut, the daughter of ailing former Elgon Member of Parliament, John Serut, stated on Friday, October 15.

"I never imagined we’d one day be in a situation where we are seeking financial aid," she added while speaking candidly on his father's illness that has left the family fundraising online, to meet his expensive medical bills.

As John Serut is battling cancer, his daughter, other than trying to raise funds was forced to respond to criticism online. This was after a section of Kenyans wondered why a former lawmaker's family would call for a fundraise yet MPs reportedly amass wealth during their tenures in office.

The 23-year-old explained that she had heard stories of families spending all their fortune on medical bills but had never witnessed such an experience first-hand.

Her father's illness threw them in the deep end and put her in a spot where she saw how grim and expensive the healthcare sector in Kenya is.

"I heard people saying many families in Kenya are one disease away from poverty. I am not saying we, the Seruts, are poor, but I’ve come to understand what that phrase exactly means,” Michelle stated during an interview with a local daily.

According to Michelle, Serut was misdiagnosed with Anaemia in 2017 after seeking treatment at a local hospital.

The former MP, according to the daughter, would faint and become unconscious.

During this time, Serut was treated and discharged. However, the situation worsened, later on, as Cancer, which was lurking in the shadows surfaced.

A specialist at Kenyatta National Hospital (KNH) attended to him and discovered that he had bone marrow cancer.

Michelle disclosed that her father was further diagnosed with Multiple Myeloma in January 2020 and has been in and out of the hospital.

Multiple Myeloma is cancer that forms in the plasma cells - White Blood Cells that originate in the Lymphoid organs. The disease affects multiple organs like the kidneys, bones and liver.