By ManenoManeno (self meida writer) | 17 days 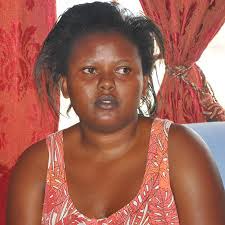 Winfred Wangui was born in a humble family a reason she was not able to continue with education immediately she completed her class eight. She had lost her father at at that age as well was very sure that her mother would never be able to take her to secondary school.

Knowing all this, she moved out of her way to look for a job as a maid and fortunately landed to Kimani Wamatangi's home where she was employed as a maid. Three days later Winfred was raped by her employer who ordered her to shower in an attempt to conceal evidence of rape.

Winfred Wangui however affirms that since then Wamatangi has never taken care of his daughter leaving her alone to take care for their daughter. She however has forgiven the Senator as her efforts to get assistance has hit a rock bottom as she has no money to get justice. Her focus has been to cater for her daughter who is now 14 years old, but never seen her father who also has never bothered to see her or know their progress.

Content created and supplied by: ManenoManeno (via Opera News )

"Tutakula Nini?" Woman Beats Her Husband Badly In Front Of Kids After He Returned Home With Nothing.

Why Professor Hamo Has Been Fired From Hot 96