During his last interview on Daybreak morning on Citizen Tv, Professor Peter Kaganjwa alleged that Ruto's Hustler Nation manifesto and Prof George Wajackoya'sGanja Manifesto will clash leaving Raila Odinga as the silent winner. However, appearing again in the second podcast, Kagwanja has alleged the number of votes Azimio la Umoja one Kenya coalition flagbearer Raila Odinga will get in August 9th General elections. 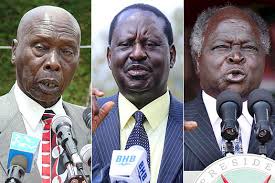 Professor Peter Kaganjwa predicted a looming record breaking win by the AImio La Umoja presidential candidate, Raila Odinga . Speaking during his late night interview at Tav 47, Kagwanja noted that the Azimio La Umoja will trash the Kenya Kwanza Alliance with a historic 60 percent in round one of the August 9th general elections.

He alleged that Raila's win will resemble the history of the 1992 and 2002 general elections where the Mount Kenya votes experienced great apathy. In 1992 , where Kenneth Matiba and Mwai Kibaki became two presidential candidates from the Mt Kenya region who split the votes, giving president Danial Arap Moi's victory.

Again Prof Kagwanja reminded In 2002, where the late Kibaki again competed with youthful president Uhuru Kenyatta and the Mt Kenya votes were split. However, Kibaki triumphed after he got massive support from vote rich regions such as Western, Luo Nyanza and Coast region.

And Prof Kagwanja now believes that the Azimio La Umoja one Kenya coalition Party will win not only because it will garner the Mt Kenya region votes, but boasts huge support from other parts of the country.

Presidential Candidate Concedes Defeat, Hints at Who Should be Declared Winner [Video]

JUST IN: Azimio Leaders Cries Foul after Being Locked Out Of Bomas Of Kenya