By Aine_Ce'Bruke (self media writer) | 1 year ago

On November 27, 2020 Halima Mdee, former Member of Parliament for Kawe, Tanzania, on Chadema ticket , for a Chadema party ticket which is one of the women stripped of membership on Friday, November 27, 2020. . The decision was based on the resolutions of the Central Committee meeting today in Dar es Salaam. According to the committee, the members have the opportunity to apologize in writing to restore their membership. They also have the right to appeal within 30 days against the decision of the Central Committee. 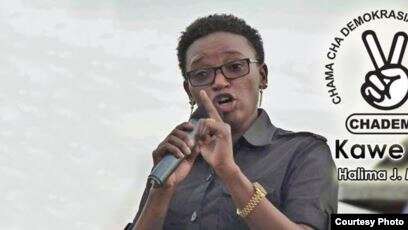 Earlier on Friday, the Director of the National Electoral Commission (NEC), Dr Wilson Mahera on Friday said Chadema secretary general John Mnyika had written a letter to him on November 19, 2020 with a list of nominees for the special seats and that the commission used the list to nominate MPs for those seats. A meeting of the Chadema Central Committee had been convened to discuss their members who were sworn in on November 24 as MPs for special seats in Dodoma. The swearing-in ceremony was opposed by top party officials who said they had not approved their names and asked the commission to tell the truth. The target audience is Halima Mdee, Esther Matiko, Grace Tendega, Cecilia Pareso, Ester Bulaya, Agnesta Lambart, Nusrati Hanje, Jesca Kishoa, Hawa Mwafunga, Tunza Malapo, Asia Mohammed, Felister Njau, Nagenjwa Kaboyoka, Sophia Mwakagenda, Kunti Majala, Stella Fiao, Anatropia Theonest, Salome Makamba and Conchesta Rwamlaza. Following their swearing-in, Mnyika held a press conference and stated that no meeting had been held to approve the names and forward them to the NEC but today the commission

mentioned Mnyika as submitting the names. But in his public statement, Mahera said, “it should be noted that the Chadema secretary general wrote a letter to the NEC director with reference number C / HQ / ADM / 20 / TU / 05/141 of November 19 which submitted a list of nominees for nomination. to be MPs for special seats. ” "The commission used the list submitted by Chadema to nominate MPs for those seats. Therefore, women MPs for Chadema's special seats were appointed in accordance with all constitutional and legal procedures, "she added. The party's leader, John Mnyika, his deputy in Zanzibar, Salum Mwalimu, while the vice-chairman of the mainland, Tundu Lissu, a former presidential candidate for the party's ticket, shared online. John Heche, Pastor Peter Msigwa, Joseph Mbilinyi famous Sugu, Boniface Jacob, Suzan Kiwanga, John Mrema, Julius Mwita, Rodrick Rutembeka, Patrick Ole Sosopi, Hashim Juma and John Pambalu, who is the chairman of the party's youth council.

Content created and supplied by: Aine_Ce'Bruke (via Opera News )

Ruto Told he Won't Rule in Peace, What Gachagua Will Start Doing Soon After They Disagree

Percentage Of Women Voters Supporting Karua Vs Those For Rigathi

Newspapers: Ruto's Battle To Undo Karua Effect, Kalonzo Into Herding Cows As He Plans What Next.