Incidents of chaos during political rallies have been common in the country in the recent past with the government and various sections of the public urging politicians to abstain from this vice. 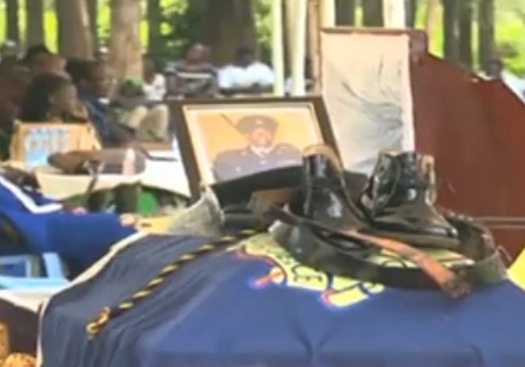 A few days ago, while the Azimio la Umoja One Kenya Alliance party running mate, Martha Karua was in Kisii, chaos ensued after a police officer is said to have lobbed a teargas at the podium sending pandemonium all over.

Such instances have always been condemned with the strongest terms possible as elections should not be a time when Kenyans divide on such basis.

This evening, according to reliable reports from Bungoma County, a Senior Police Officer has been laid to rest at his home in an emotional ceremony that brought together thousands of mourners.

The emotional affair saw the National Police Service lay to rest one of their own who succumbed to a brief Illness a few days ago as per the reports that we have with us.

The fallen police officer is said to have been the assistant police commander in Bungoma where he has been working for some time.

Supporters of Kanduyi Member of Parliament Wafula Wamunyinyi and those of his closest rival John Makali went at each other during the burial earlier on this afternoon.

The police who were there to bury one of their own, when they noticed the chaos that was going on, carried the body of the deceased from the primary school where the event was being held and went to his home for the burial leaving the politician's supporters to claw each other.

Picture courtesy. Image of police officers from the burial in Bungoma.

Revealed: What Caused Commotion Between Azimio and Kenya Kwanza Agents as Kenyans React

Why These Top Kenyan Rappers Cannot See Eye To Eye.