Deputy president William Ruto’s popularity in Mt. Kenya is quickly dropping even though he still stands as the most favorite presidential hopeful in the region. 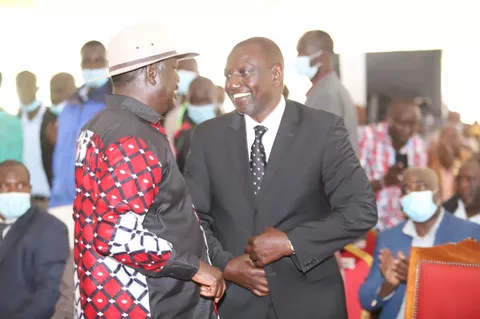 Raila Odinga is turning the tide in the mountain territory as he continues traversing the region seeking support for his 2022 State House bid.

Raila’s campaign in Central Kenya is gathering fruits because the DP's dominance in the turf has dramatically fallen in a short span.

President Kenyatta’s die-hard disciple and blogger Pauline Njoroge dashed to social media on Thursday October 14th to celebrate after latest survey indicated that Ruto’s support in Mt. Kenya had gone down by 24%.

The report illustrates that the second in command's approval rating in the vote rich region is currently at 61% down from 85% in January.

Pauline and those in dire allegiance to Raila’s presidency quest are rejoicing even though Ruto remains the favorite candidate in Mt. Kenya simply because they know the former premier doesn’t need full reinforcement from the area to get to the country's top seat.

Odinga had been garnering about 3% of the total votes in Mt. Kenya region in the past elections.On the same note, political analysts say the ODM leader needs about 15% support from Uhuru's backyard if he is to win the upcoming elections.

Odinga's allies from the province vowed to ensure he gets at least 30% support from Mt. Kenya, hoping that makes a substantial hold of his Western, Nyanza, Coast and Nairobi strongholds.

Kenyatta dispatched his followers led by Kieni MP Kanini Kega, Nyeri Town MP Ngunjiri Wambugu, nominated MP Maina Kamanda and others to back up Raila in the campaigns.

Reports indicate that the president wants the ODM leader to navigate the Central province alone before he can join him later massive campaigning.

So far so good, the son of Jaramogi has done an incredible job climbing the mountain, he has held rallies across the region which has been attended by thousands who accorded him a cordial reception unlike in the past.