What I Meant When I Said One Man, One vote, Raila Explains 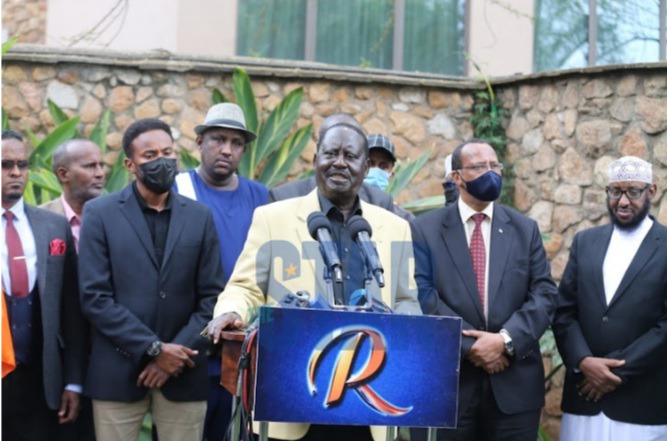 Speaking in Nairobi on Tuesday when he met with the Eastleigh business community, Raila said he had only compared the two counties on the basis of the one man, one shilling income allocation model, a vote.

"That is exactly what I said and it has been misinterpreted by my critics. And I want to tell them that they will not get there," Raila said.

The former prime minister made the statement when addressing residents on his way back from a church service in Kigumo, Murang'a county. He gave a comparison that a county will receive less population and receive more allowances, compared to another with more people.

“Hon Raila has constantly agitated and campaigned against the decentralization of money that counties like Mandera and others in the NFD and pastoral counties receive… his obsessive hatred is very disheartening,” lawyer Ahmednasir Abdullahi said in a tweet.

Too bad that desperation for power can push a leader to soak up ignorance. Income is allocated on the basis of a constitution that has been approved by all Kenyans, not BBI garbage. And just for the records, Kiambu got 12B, and Mandera legally got 11B! Cheap politics. pic.twitter.com/tRCkrjZQgE

Raila took his unity campaigns to Mount Kenya on Sunday as he stepped up efforts to reclaim Vice President William Ruto's perceived dominance over the region.

The former prime minister unveiled to the faithful gathered in Kigumo, in Murang'a county, his plans for the region if he became president.

The ODM chief said he had big plans to solve farmers' problems in tea, coffee, avocado, milk, among other sectors of the agricultural economy.