Lawyer Ahmednassir Abdullahi has finally claimed that He will be soon announcing His stance and choose between William Ruto and Raila Odinga, claiming that His silence and attitude has left many questioning His own stance and decisions, now that He is one of the most respected senior counsels in the Country.

Speaking through Twitter, Ahmednassir says that His long decision to remain calm and not announcing His decision between Azimio and Kenya Kwanza faction is not a good decision and also not sustainable at all angles, since each powerful figure in the Country has chosen His side in the struggles, and also moved with their supporters at large.

He went ahead to say that it has come a time when He has to make informed decisions and come up with a favorable choice between the two, adding that He wishes that He does well before we reach 9th Aught when we will be doing the elections. 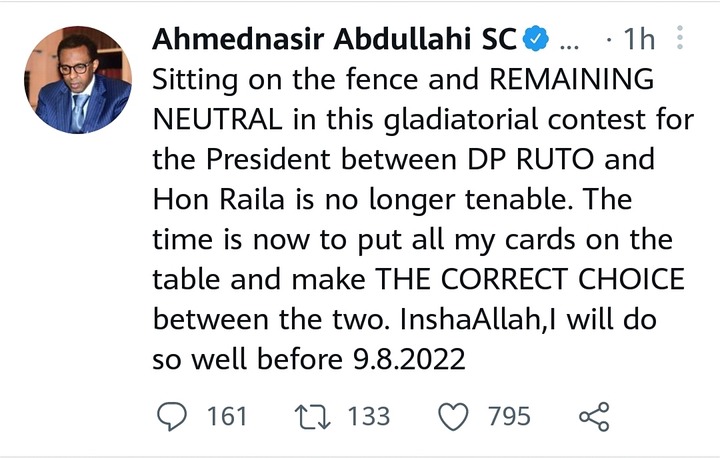 Professor Mutahi Ngunyi who also seconded Him said that He should be respected and addressed properly since He is the founder and father of the UDA faction which was later hijacked by Ruto for His own advantage.

Ngunyi further attacked Ruto saying that He has been moving around in the Country while claiming that He is a Hustler but He owns many properties including 5 Helicopters which cost Him Billions and that makes Him different from Hsu supporters whom He claims are genuinely supporting Him.

However, in what appeared to be some kind of joke and measure of reactions from Kenyans, the state House Official said that Kenyans should overwhelmingly vote for Wajackoyah Luchiri as the next president of Kenya, since He has the expertise to rule the country and good Manifesto. 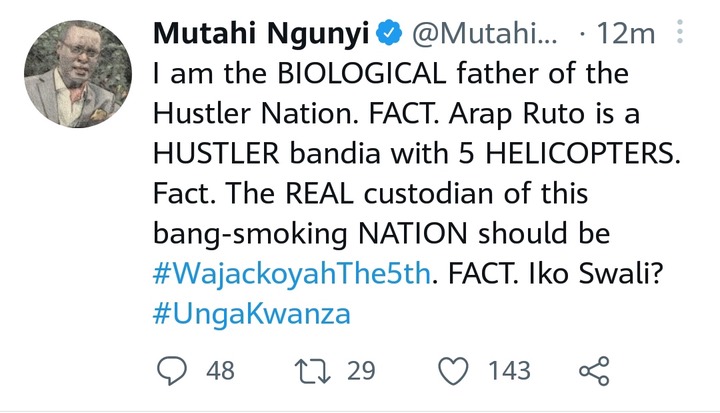 Ngunyi also referred to Kenya as a Bhang smoking country, something that drew attention from Kenyans who flocked the Comments section of His post to give reactions.

The who have been clashing on social media for months, with Abdullahi supporting Ruto while Ngunyi sometimes remaining neutral or supporting Raila, who has been termed as Uhuru Kenyatta's project, who has since been Campaigned for by State House Officials left, Right and Centre.