By E-NewsKe (self meida writer) | 1 months

The The Service Party (TSP) leader Mwangi Kiunjuri, has warned that President Uhuru Kenyatta and his government should diligently leave in August 2022 and should not even think of extending even for a single day more.

He said his party would go to the High Court for advice on plans allegedly hatched by the current government to extend President Kenyatta's term in office.

"They must leave office on August 9 next year, there is no extension of the term of governors, members of parliament or the President," he said. 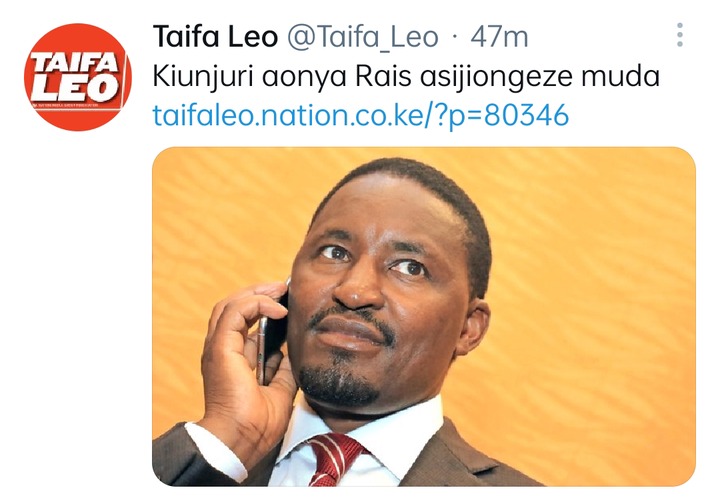 Mr Kiunjuri said that in the High Court, his party would seek clarification on whether the Reconciliation Plan (BBI) could be a reason to extend the term of the current government in power.

He said it would be wise for the President to end his term as required by the constitution and leave office.

"The constitution is clear and we will soon go to the Supreme Court for advice on constitutional matters. We will ask the High Court to tell us a few things and advice on whether the BBI could be a good reason to extend this term, ”said Mr Kiunjuri in the village of Limunga, Laikipia West Sub-County during the funeral of Sophia Nyambura Kimani, the mother of the councilor. Marmanet Ward, Simon Kanyutu.

His statement came just days after the Independent Electoral and Boundaries Commission (IEBC) said it was facing many challenges ahead of the next general election.

The IEBC cited a shortage of funds, time and legal thresholds as major challenges facing its efforts to hold free and fair elections.

In particular, the IEBC states that the lack of adequate funding has made it unable to set up its own technology facilities on time.

Mr Kiunjuri criticized President Kenyatta for what he described as a lack of priority.

"What is important is for the government to provide timely money to county governments so that governors can pay traders and contractors so that the money goes into our pockets. Government workers must be paid on time so that they can feed their families.

"But this government has discouraged Kenyans, we have seen money coming from the IMF and other donors but what we are doing is building roads while people are running out of food," added Mr Kiunjuri.

The TSP leader said that there are important issues that continue to negatively affect Kenyans that need to be addressed urgently.

Newspapers on Thursday, July 29: The Nations, The Standard, People Daily And Taifa Leo