Raila's wife Reveals how politics has been costly to her and why she stills involves herself in it.

By Nyagaka (self media writer) | 1 year ago Ida Betty Odinga(born Ida Anyango Oyoo on 24 August 1950 is a Kenyan businesswoman, activist and educator. She is the wife of Raila Odinga, the former Prime Minister of Kenya and the leader of National Super Alliance (NASA). In 2010, The Standard named Odinga, who was one of the first women to head a major Kenyan company, as one of the top the most powerful women in Kenya in 2010.She worked as a teacher for more than twenty years after graduation.She taught at Kenya High School, an all-girls public school located near Nairobi. Her students included the late Governor of Bomet County, Joyce Laboso.

When Raila Odinga was imprisoned in 1982 as a political prisoner by the government of President Daniel arap Moi.Ida Odinga largely raised her four children herself during those years while working as a teacher.However, Ida Odinga was later expelled from her teaching position by the Kenya African National Union-led government due to Raila Odinga's political opposition.

Ida has actively been engaging herself in matters national politics and has been spearheading the Involvement of women in leadership.Through NTV,The wife to Raila Odinga shared why she actively engages herself with politics pointing out various reasons which outstands her from other politician's spouses. 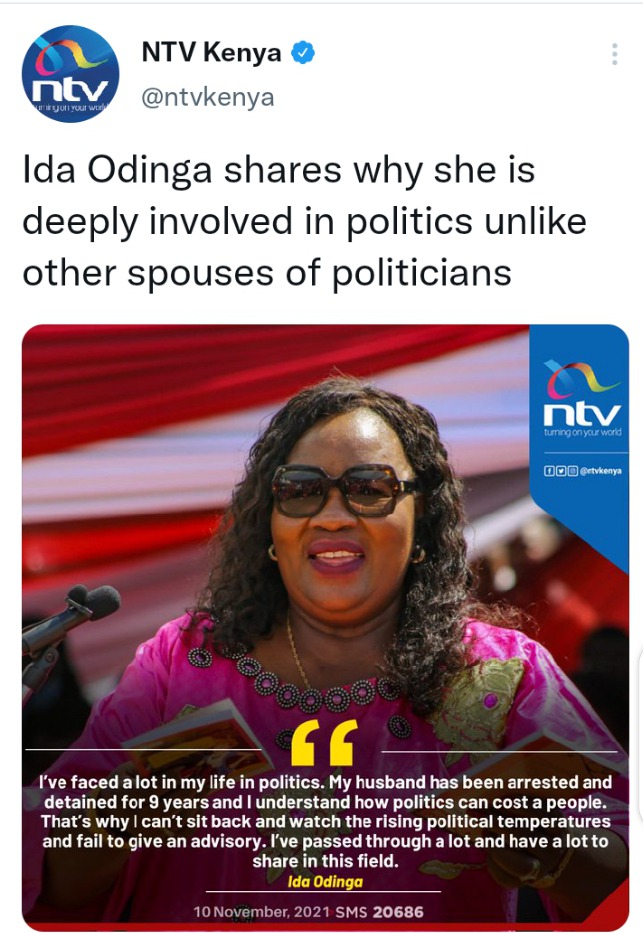 "I've faced alot in my life in politics.My husband has been arrested and detained for 9 year's and I understand how politics can cost a people.Thats why I can't sit back and watch the rising political temperatures and fail to give an advisory.I've passed through a lot and have a lot to share in this field,"she stated.As we approach next year's election,she is seen to be fully in support of his husband's candidature and we expect to see her more oftenly campaigning alongside her Raila in the race to state house 2022

Content created and supplied by: Nyagaka (via Opera News )

Why You Should Have Spiritual Discernment