By Faithmusyoka | self meida writer
Published 23 days ago - 24 views

Dr Achieng’ Ong’ong’a Oneko was born in 1945 as the first born of 11 children, his father was a former freedom fighter Ramogi Achieng’ Oneko. 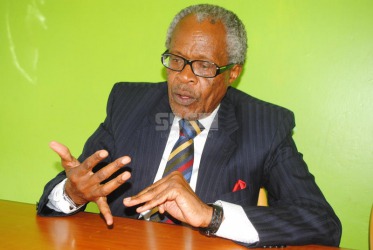 He served as the Managing director of the Kenya Tourism Board (KTB) during former President Mwai Kibaki's era.

Dr Achieng’ Ong’ong’a Oneko was a revered figure in the government of Kenya.

On september 10, 2011, the anti corruption court magistrate Lucy Nyambura jailed him for illegal payments of money to Muriuki’s tour company that coordinated a visit to the Maasai Mara for former President Mwai Kibaki and other top government officials.

Ong'ong'a, in 2009 found himself facing jail when he was charged with defrauding the ministry of Ksh 8.4 million.

This trip in question was a 2008 excursion to the Masai Mara which the trio had organised and funded for Kibaki and Permanent Secretaries to familiarise themselves with the marketing of wildebeest migration in the Game Reserve.

He was found guilty of two other charges of failing to comply with procurement rules and approving payment for services not even rendered.

While in prison he revealed that the stories in prison enabled him to sleep, but lessons from his father’s experience as a detainee inspired him so much.

Achieng Ong Duncan Muriuki Kenya Tourism Board Lucy Nyambura Oneko
Opera News is a free to use platform and the views and opinions expressed herein are solely those of the author and do not represent, reflect or express the views of Opera News. Any/all written content and images displayed are provided by the blogger/author, appear herein as submitted by the blogger/author and are unedited by Opera News. Opera News does not consent to nor does it condone the posting of any content that violates the rights (including the copyrights) of any third party, nor content that may malign, inter alia, any religion, ethnic group, organization, gender, company, or individual. Opera News furthermore does not condone the use of our platform for the purposes encouraging/endorsing hate speech, violation of human rights and/or utterances of a defamatory nature. If the content contained herein violates any of your rights, including those of copyright, and/or violates any the above mentioned factors, you are requested to immediately notify us using via the following email address operanews-external(at)opera.com and/or report the article using the available reporting functionality built into our Platform