Why Raila Will Win With a Big Landslides Come 2022(Opinion)

The Orange Democratic Movement party leader, Raila Odinga, is one of the presidential hopefuls who hope to lead the country come 2022. The former prime minister has the capacity of winning big ahead of the 2022 general elections. Here are some of the undisputed facts that may help Raila win big come next year's general elections. 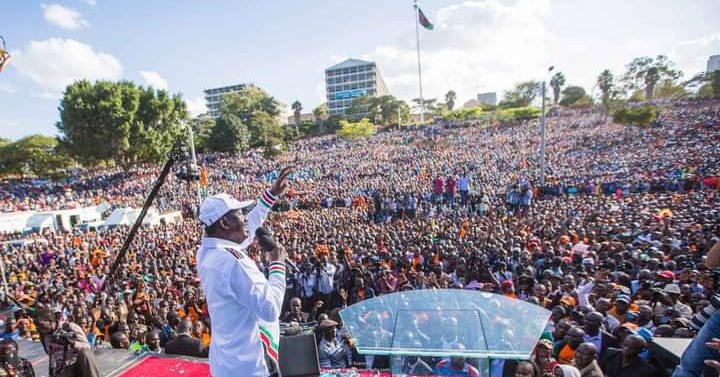 1: Coast region has no presidential candidate and the top leadership in that region, Ali Hassan Joho, and Amason Kingi, are supporting Raila. The two leaders are much influential compared to the leaders supporting Ruto in the region.

2: In the Central Region, Raila has seemingly grown his popularity in that region. Having no presidential candidate who has shown up Raila might pick a lot of votes from the region. Vocal politicians from the region like Peter Kenneth, Martha Karua, and Mutahi Kagwe have shown their willingness to work with Raila Odinga. This is a big win for Raila in Central province ahead of the next year's elections.

3: In the Rift Valley region, the votes can be said to be 50-50 as some supporters support Ruto while some support Raila. Although the region is thought to be Ruto's bedroom, he might end up not getting 100% votes from the region.

5: In the Nairobi region, the deputy president rarely campaigns on that region. The region has over 2 million votes and is likely to be a big win for Raila because most people from the region support him.

6: North Eastern region has no presidential hopeful ahead of the 2022 general elections. The base of Ukur Yatani and Adan Kenan may influence the people in that region and influence them to elect Raila as the Fifth President of Kenya.

7:In the Western Region, different people wish to vie for the presidency, the One Kenya Alliance and Raila Odinga but OKA might end up supporting Raila for the presidency ahead of next year's general elections.