Ruto Finally Reveals Why Uhuru, Raila Betrayed Him As He Donates Car to Kakemega Pastor

By Kangogoblog (self media writer) | 1 month ago 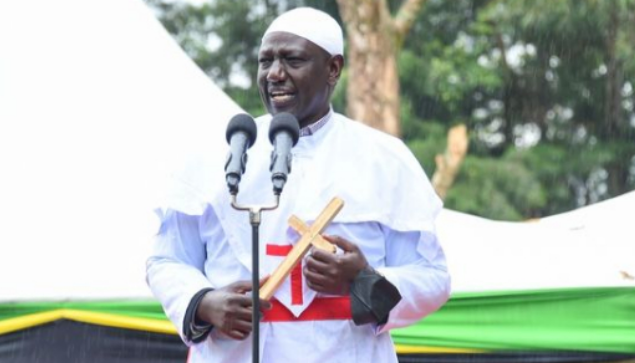 Deputy President William Ruto has finally revealed why he believes President Uhuru Kenyatta and ODM leader, Raila Odinga betrayed him. Ruto who was speaking on Saturday , 18 , September in Kakamega County claimed that he campaigned for Raila Odinga in 2006 to 2007 but the ODM leader went ahead to betray him. He narrated how he was almost locked up by the International Criminal Court (ICC) at the Hague for supporting Raila who turned against him.

However, Ruto recounted how he joined forces with Uhuru and got him elected in 2013 and re-elected in 2017 but he abandoned him and joined hands with Raila. He claimed that the two leaders came together through the handshake with the intention of locking him out of the 2022 presidency.  Ruto went on to say that Uhuru and Raila betrayed him because his father was a nobody compared to their fathers.

“I campaigned for Raila Odinga in 2007 to the point I was almost being locked up in Hague. I helped my friend Uhuru Kenyatta to become President in the 2013 and 2017 general elections. All these happened in broad daylight. Now, they have teamed up to lock me out of the presidency, claiming my father was a nobody in Kenya. Even the kid of a single mother can become President in this country. Let them go away,” Dr Ruto stated.

The second in command stated that his spirit has not been crushed by betrayal from his former political allies adding that he is out to clinch the presidency of the country and change the lives of poor Kenyans who he claimed have been forgotten.

He also opposed a fresh bid by a parliamentary committee to expand the Executive by creating five new positions.DP Ruto hit out at MPs pushing for the bill urging them to stop wasting resources to debate issues that “have no direct impact on lives of Kenyans.”

“Where does Parliament have the time to discuss positions yet it has many pending Bills like the one on housing and NHIF among others?” he posed.

The DP also  donated a car to a pastor in Malava town during his brief visit to The African Church of The Holy Spirit in Malava.  Ruto gave the presiding pastor at the church the car, before he proceeded to the Kakamega streets where he spoke to traders.

The locals were happy with DP Ruto’s move of gifting the priest a car, saying he is a good leader since he is not religiously biased. Dressed in the African Church of The Holy Spirit Uniform, DP Ruto urged the congregation to support the bottom up economic model, as he claimed it is in the bible and quoted a number of scriptures that he claimed make reference to it.