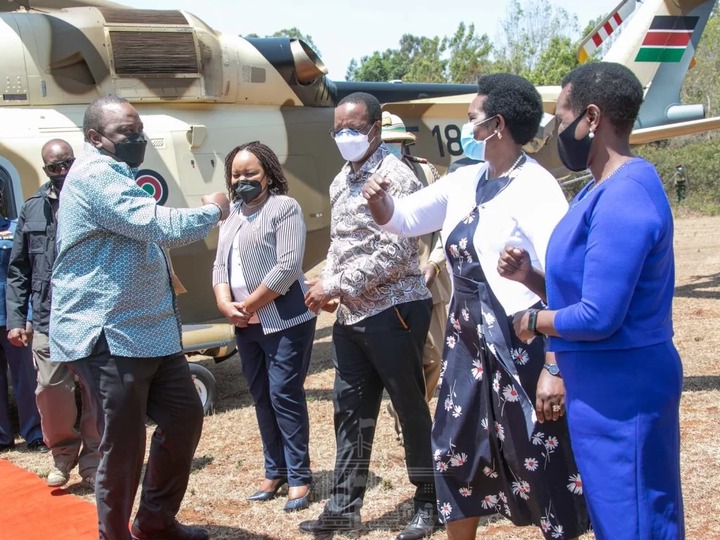 President Uhuru Kenyatta is currently in Sagana, Nyeri county for a series of activities among them meeting leaders from Kirinyaga county ahead of the Mshujaa Day celebrations. The county which is in President Uhuru’s Mt Kenya backyard will be hosting this year’s celebrations at a time when the president and his deputy do not see eye to eye.

Over the weekend, Waiguru accused officials from the Interior Ministry led by PS Karanja Kibicho of high-handedness and ignoring her role as the governor, in the celebrations which will be held at the Wanguru Stadium.n

The meeting is also coming at a time when Kirinyaga Governor Anne Waiguru is accusing the national government of sideling her in the preparations for the national event which will be held on Wednesday.

”I have been sidelined from Mashujaa Day preparations. I have not had a say on who is going to be in the stadium, I have no say at all as the host. They said the County Commissioner is the one who is running the show so I absolutely have no say,” the Kirinyaga governor said on Saturday, remarks which were dismissed a day later by Dr. Karanja Kibicho who asked Governor Waiguru not to drag politics into national celebrations.

Speaking at the Ndindiruku village on Sunday, Dr. Kibicho dismissed the Kirinyaga governor’s assertions, saying the government had asked the county’s leaders to each nominate five individuals to attend the October 20th celebrations.

Today’s meeting with the president is expected to iron out any issues between the two warring factions.