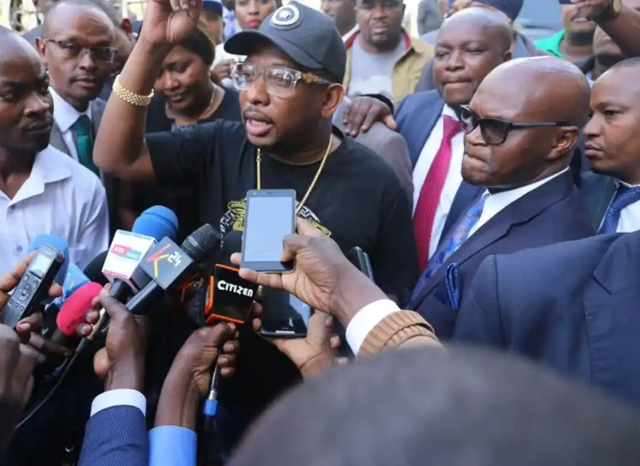 The former Nairobi Governor took to his social media page and posted a lengthy message detailing how he almost became a cop.

In his statement, Sonko disclosed that he attended a police recruitment exercise in 1993 and qualified only to be rejected for running too fast.

“A day like today in 1993 I wanted to become a police officer, I left my construction site where I was supervising the construction of my 14 bedroomed house opposite Golden guest house and went for police recruitment at Kwale grounds. In the last recruitment stage, we were told to run 150 metres. Nikajaribu yangu yote and took the first position, nilipomaliza as a winner I was slapped several times na nikakuwa disqualified ati I was running very first like a thief and not a police officer,” Sonko stated.

He said that he got frustrated and walked into his car but he was approached by three police officers who questioned him about his car but the then Kwale Deputy OCPD intervened.

“I then went to my blue Mercedes benz KUW 008. As I opened the driver’s door 3 cops followed me wakaniuliza hi gari ni yako au ya babako au you have been employed as a drivers incentives, since nilikuwa na hasira I answered them zote. At this point former Kwale Deputy OCPD a Mr. Gituku ( alikuwa na mvi ya white) akaingilie and told them huyu kijana ni katajiri kahapa ka mashamba,” Sonko said.

“I opened the dashboard of my car and gave them 3k each in 500’s. Then evening when I was at my local pub Simba bar Kwale town the officers came for a drink in company of Mr Gituku. I treated them well before they left saying that i have qualified and I’m supposed to report to kiganjo for full police course,” he added.

He noted that he was excited about the opportunity, however, adding that he was discouraged after sharing with his friends.

“The following day I was excited Nika share the good news with my friends Mr Antony Oyier who was the DO matuga( his father was a PC ), Mzee Githende Gachanja who was the principal government training institute Matuga, police constables Chacha, Ngowa, Aden and Muita who were all my best friends wakanidiscourage wakasema unajua ile shida inakuanga kwa training kiganjo, what are you lacking in life that you want to become a police officer, wachana na hiyo mchezo. Sikujua kumbe God had better plans for me. Imagine had I accepted the offer of going to kiganjo today ningekuwa karao,” the former Nairobi Governor said.

Prepare For Heavy Rainfall From Monday, 26th July If You Live In These Parts Of The Country