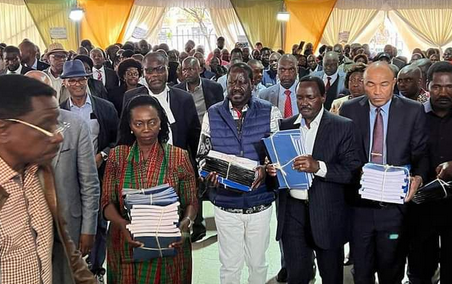 The Azimio La Umoja One Kenya Alliance led by the Former Prime Minister Raila Odinga and Narc Kenya Party leader Martha Karua wants the Supreme Court disbanded entirely on claims that it did not deliver a fair judgement on the presidential petitions.

Raila, Karua among other petitioners had implored upon the court to dismiss the August 9th presidential results that showed that President William Ruto was the winner after garnering 7.1 million votes.

Since the ruling on September 5th, the Azimio team have been claiming that the apex court was aligned to Ruto's Kenya Kwanza Alliance camp, and they ignored the evidence tabled against the win arguing that the elections were marred with irregularities.

According to a report by Citizen TV, the Azimio wing wants all the judges ousted, and a new team installed way before the next polls. 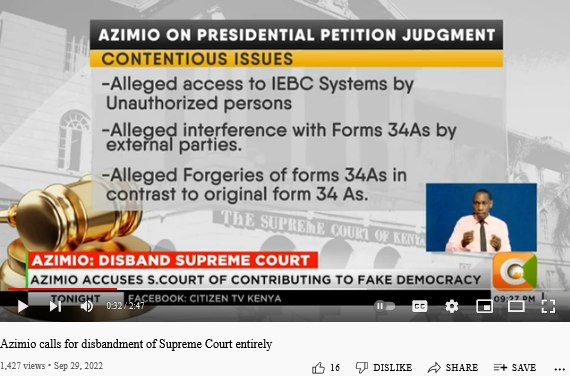 The Raila-Odinga led team listed six issues they claimed had been ignored deliberately by the seven judges, who unanimously upheld Ruto's win.

These are; Alleged access to the IEBC systems by unauthorized persons, alleged interference with Forms 34As, alleged forgeries of Forms 34As in contrast to the original 34As forms.

The others are; Alleged suppression of numbers by the postponement of the Kakamega and Mombasa gubernatorial elections, the verification and tallying of the presidential elections, as well as allegations that the winner did not get the required constitutional threshold of 50 per cent plus one vote.

The Azimio wing further argued that the language used by the judges lacked courtesy, claiming that the Supreme Court will be the biggest barrier of having a democratic country.

Political leaders and experts allied to Ruto's Kenya Kwanza Alliance has been defending the court, saying that it is unfortunate that the Azimio wing only accepts win when it is on their side.

Kalonzo Musyoka Specifies This One Condition For Working With President Ruto