The standard today focuses on Raila's first step towards presidency. The ODM leader has already submitted his papers expressing willingness to fly the ODM ticket in 2022.

Yesterday, he met top party leaders and made various declarations as he laid grounds for his fifth attempt at the presidency which is arguably the very last Bullet.

He stated that the BBI must be subjected to the refrendum to allow people have their say on the documents.

He also urged party Chairman John Mbandi to whip members at the floor of the house to fast track the parliamentary process so that the BBI bill is passed on record time.

Raila's move sharply contradicts with what other top leaders in the party had said earlier on.

The likes of ODM deputy party leader Wycliffe oparanya had urged that refrendum money be used to tackle COVID-19 pandemic as BBI is not a priority and can wait.

The Standard also reports that there is a big shortage of oxygen as patients gasp for air courtesy of COVID-19 upsurge.

This is despite the hefty allocations meant to buy enough oxygen cylinders as the third and most lethal wave strikes hard.

Finally the the MP for kiambaa Paul koinange became the latest casualty to succumb to COVID-19 in a Nairobi hospital. 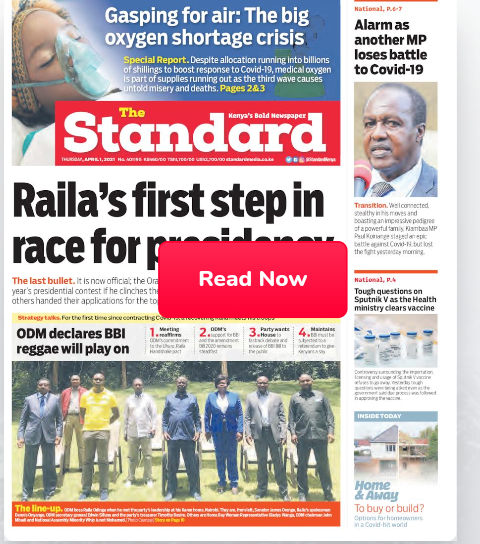 The Nation's headline puts a spotlight on Raila's decision to be on the ballot come 2022 after many months and years of speculations. This follows his move to express interest in flying ODM ticket whose deadline was set for yesterday.

Raila will battle it out with Mombasa Gorvenor Ali Hassan Joho who has equally stated that he has come of age having grown in the party ranks from being a young Turk.

However, it's obvious that the ODM's election board will clear Raila to run for presidency where he will face DP William Ruto and possibly a candidate from one Kenya alliance that enjoys Uhuru's Support.

In another story on the front page, the teachers SACCO mwalimu national has lost a huge fortune following a financial blunder its top excutives made in 2014.

During that year, the excutives approached shrewed businesman Naushad Merali who specializes in buying loss making entities before selling them with an aim of having a controlling stake in his equitorial commercial bank.

Having acqired the majority Stake at over ksh 2 billion, Mwalimu changed the name to spire bank.

Continued loss making has wiped out the initial investments and late last year the SACCO had to buy out Merali in a bid to get a Strategic partner.

Spire Bank has largely been a financial sinkhole with members money always being used to enable it stay afloat.

In another story, three counties have run out of the vaccine as more and more people turn out to be Vaccinated. Nairobi and Uasin Gishu are the worst hit. 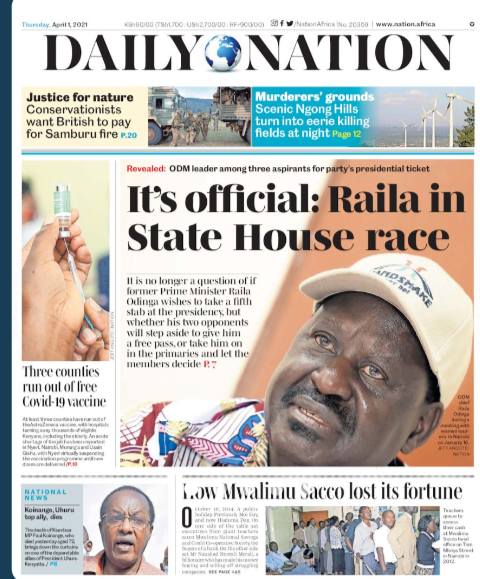 The busines daily's headline is on the return of the dreaded auctioneers as bad debts continue to accumulate.

Banks are Registering high default rates on loans extended to clients forcing them to seek Services of auctioneers inorder for them to recover the loaned money.

In another story Kenya have given Tulloy an ultimatum to give a comprehensive investment plan for it's oli exploration at Turkana.

The country is getting impatient with the delays in commercialisation of Turkana petroleum since it was discovered.

Delays are however caused by COVID-19 and low prices of the oil products in the international markets. 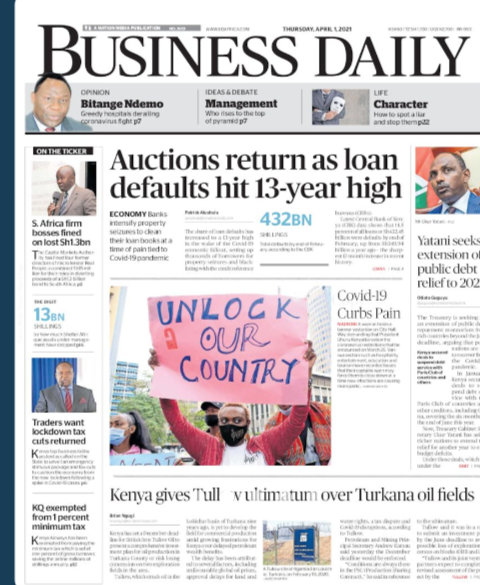 The Swahili publication's headline trains it's guns on the possible collapse of BBI where various parties aren't agreeing on the way forward.

If it collapses, Taifa leo Estimates that the country would have lost over ksh 20billion that have so far been used on the document. For these and more stories Gran yourself a copy of your choice. 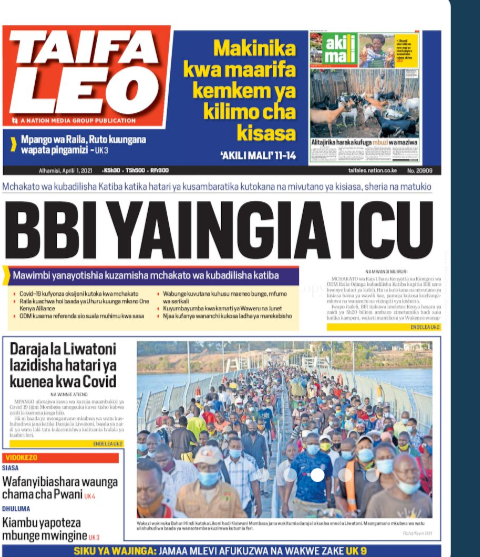 Will Raila be successful in his fifth attempt at the presidency? Feel free to share your thoughts and comments on this on our comments platform.

3 Things For Lookout When Preparing Chapati

The Aftermath Of Purity Mwambia's Expose

Treat Her This Way, She Will Never Think of Another Guy

Here Is How To Cook Spaghetti