By Ckibiba (self media writer) | 28 days ago 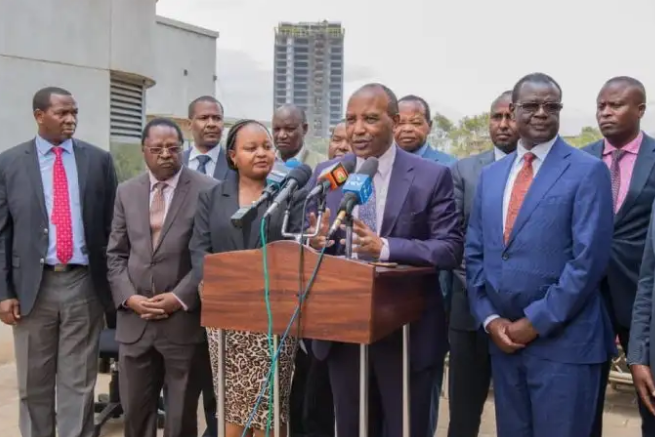 Even as the region intensifies its groundwork to form a lethal operating team that will advance the area’s interests, one of the 2022 hopefuls from Mount Kenya, Murang’a, appears to have introduced a new and very simple matrix that, if employed next year, will leave all other presidential candidates on their knees.

The cruel but effective strategy is that; the region fronts one of their own, but still give some votes to the two front-runners so that this can force a run-off.

In the run-off, they can then declare that they will only support the one who, between the two, will cave in to their demands.

Speaking to K24’s Alan Abinadab owino, former Principal Secretary for Transport, and who also served in the Planning docket Irungu Nyakera, argued that despite all the efforts currently being employed to try and negotiate a favourable 2022 package for the region, a better bargain stands to be gained in a post first round election deal, and not earlier.

Nyakera asserted that the only way the region will have a meaningful voice on the negotiations table is if they support either of the front-runners, but at the same time, also front one of their own who will force a run-off by emerging position three. At this point, the region will be in a perfect position to force any of the leading competitors into whatever kind of deal that they want.

The youthful politician who has already announced his intention to vie for the Murang’a gubernatorial seat come next year’s election, is one of the leaders who has ensured to chart a political route that seeks impartiality, and for that reason, has yet to unequivocally declare support for either Uhuru Kenyatta, or his deputy, William Ruto.

In the press briefing, the leaders said they had come together to address permanent issues affecting their region ahead of the 2022 General Election.

“This forum is not limited to the presidential race but to unite the Central Region and the diaspora. It is not a short-lived forum but one that will outlive us,” Karua said.

Wednesday Football Tips Including GG And Must Win Matches With 58.21 Odds To Place High And Win Big