ODM leader Raila Odinga has today been endorsed publicly by over thirty County bosses who have now shown their full support for his top political bid.

The endorsement itself has been itself has been graced by several leaders including those coming from Uhuru's camp who have pledge to do everything possible to ensure Raila succeeds Uhuru through Azimio La Umoja movement.

As many might have thought of this major move becoming a threat and fear to DP Ruto and his camp, they have instead turn it to their advantage in the game.

Through one of the very top vocal women politicians at his UDA camp, the nominated senator Millicent Omanga, it is good that Raila has been endorsed by over thirty Governor as DP Ruto now has the endorsement of over thirty million Kenyans

According to many views, the big political race is now between DP Ruto and the ODM leader Raila Odinga, and any major move that one makes always sends worries and discomfort to the other.

However, the DP and his team seem to have mastered on how to turn such situations more to their advantage. 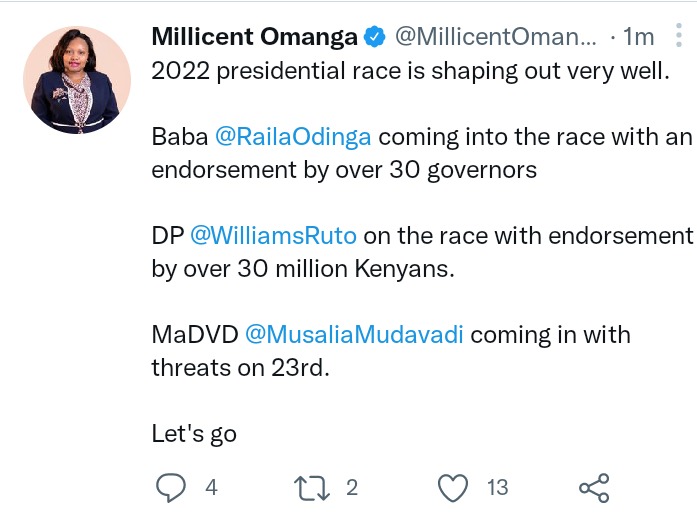 Just like the move which has been made by Raila, it appears more important to his bid and may somehow sends some fear to DP Ruto's camp.

Having about two thirds of top county board supporting your bid is something not to be taken lightly by the opponent.

But here we can now see Senator Omanga not being bothered at all by that move as she strongly believes that the DP has the endorsement and support of most Kenyans just as Raila has the support of most Governors.