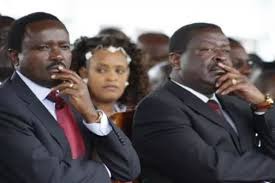 This year's politics will very attractive and will be one of the phenomenal politics in the history of Kenya.

Most kenyans have been forced to believe that this year is a two horse race where Raila and William Ruto will be the most formidable candidates and the majority of kenyans will rotate around them and vote for them this year August.

This statements have placed Musalia Mudavadi and Kalonzo Musyioka to be for a bit from the statehouse race. However, the two have two options left for them. 1. They either join either of the two and support them to win the general election or they agree and go upto the ballot.

However, this year's general election is very important to the former deputy prime minister Hon. Musalia Mudavadi and the former vice president Hon. Kalonzo Musyioka. The future politics of the two will depend on their decision in this general election.

The two will survive for 2027 if they don't make wrong decision this year. The two should agree and popularise themselves in their respective regions to get more members of parliament and other legislatures that will enable them to bargain with the side that will form the government.

The two have been promising their supporters that they will be going up to the ballot in 2017 and now 2022. This is the time to redeem themselves even if they fail but their supporters who truly believes in them have voted for them on the ballot box this year.

The risk of supporting either Raila or the deputy president William Ruto is that if one fails in the fourth coming election will have buried their politics and pave way for the governors who have served for two terms and yearns to lead the country too. For them to have command is to have leaders that have been elected on their parties in their regions.

For instance Musalia Mudavadi has more leaders from his regions that wants to take up the kingpin of the region example is ; Moses Wetangula,Wycliffe Oparanya , Eugine Wamalwa, Cleophas Malala and Sospeter Ojamong while Kalonzo Musyioka too has Alfred Mutua and Johnson Muthama that want to Kamba kingpin. If the two don't make a correct move may be forgotten politically.

1 Peter 2-9: Bible Verses That You Should Read In Difficult Situations.