As the date of the general elections in 2022 draws closer with each passing day, political leaders appear to be leaving nothing to chance in their quest to seek election. In fact, some of them are even pulling off political surprises and endorsing political camps that are in opposition to one another.

Moitalel Ole Kenta, who is running for governor of Narok county, can be seen in a video that is currently going viral on social media. In the video, he encourages voters to cast their ballots for William Ruto, who is Kenya's deputy president, if they so desire. This has sparked a heated debate. Instead of trying to rally support for his party's leader as one might assume, Kenta requested supporters to back Ruto on the condition that he be elected governor of the county.

"If I am elected governor, I will not object if you choose William Ruto as your candidate for lieutenant governor. I am a member of the ODM party, and if I were to give you any voting advice, it would be to support William Ruto for the position of deputy president. I have no interest in running for president, "he replied.

And now, his party has issued a statement on the problem, which appears to have impressed bloggers affiliated with the vice president William Ruto.

Philip Etale, who serves as the director of communication for the ODM party, issued a statement on behalf of the party to clarify that what Moitalel Ole Kenta did was completely appropriate given that he was campaigning in an area where the deputy president enjoys a lot of support. 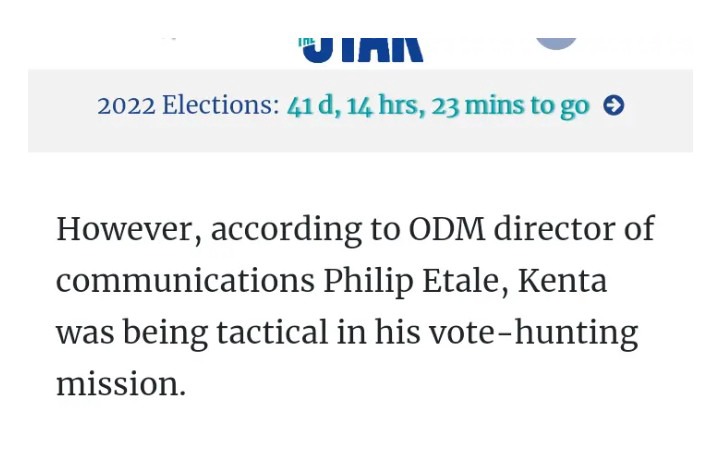 He argued that the Maasai community has allegedly always voted for Azimio la umoja One Kenya coalition party presidential candidate Raila Odinga and that they will continue to vote for Raila Odinga in the general elections in August. Raila Odinga is the candidate for president of One Kenya.

According to Etale, "the Maasai community has always supported Raila Odinga, and I know that they will turn out to vote in overwhelming numbers for Azimio in the approaching elections." Etale made this claim in his argument.

Jeremiah Kioni: It Will Take a While To Unravel What William Ruto And His Team Have Done In Mt Kenya