Here is the truth about Handshake

By Murimipaul (self meida writer) | 25 days 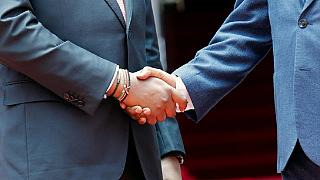 This is one of the moments that still cling afresh in the Kenyan minds, the famous handshake between the promiscuous party leaders.

This moment led to a peaceful political environment and I do not doubt that but certainly opened oppression on this other side of the hand.

The handshakers, shake hands and we now think it's okay forever, owe unto us Kenyans. is a whole opposition being brought to a level by a handshake?

The truth is here for those who have done history about Kenya. opposition is a great part player in criticizing the government's actions and enlightening the citizens about its operations so when a handshake just happens that gives a reason to smile but deep down something is being laid to plan.

It's after handshake that the government finds it necessary to amend the Constitution through the so-called Building Bridges Initiative, it's okay but lemme ask you this who said that this side of the river aint safe for us so we need to cross over to the other side. They say that it to solve the pre-election violence. okay, the current constitution that they want to amend was the one during the 2007-2009 era? The answer is no so why change it?

It's after the handshake we find that even the taxes are being pushed up the ladder and inflation inflates like no other moment. who is suffering? The common mwananchi, Wanjiru

The handshake even shook the independence of the judiciary. that a judicial court can make a ruling over the case and the maniacs up the ladder still have the say not to follow the court order. that even we see the opposition leader so to say in his speech this weekend that "reggae," is in half time and it must continue and this statement makes Kenyans feel uncomfortable because it shows more supremacy and dictations. 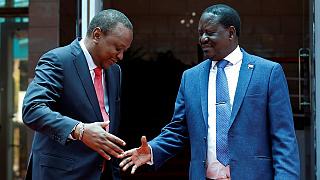 The same handshake brought division among the leading party itself.so no matter how much this people tell us the handshake is to solve the difference between us ,how are we supposed to believe it yet they potray they same division they are up against.

Says that no one is supposed to point fingers at the other quoting that the one pointing fingers are the ones who shouldn't be talking about corruption because them too have patches.

In my sought here no handshake was supposed to bring peace than there was .its just a mere illusion for us to get "there" where they want us to be

The hands should no longer be shook.its the high time we focus on the lowe ladder person we have focused on those up there for a very long time with no change at all .the truth about this all is that the handshake brought alot of Kenyans to their knees.

If its necessary its the high time we think not only outside the box but now even without the box itself,.

Content created and supplied by: Murimipaul (via Opera News )

Boyfriend Allegedly Kills Girlfriend Who Was To Travel To Qatar Today

Lady Narrates How She Raised Her Niece, Paid Her Fees Before She Betrayed Her & Married Her Hubby

Kajwang: A Coalition Is For The Willing Hence The Terms, Decree Absolute And Decree Nisi Come Handy