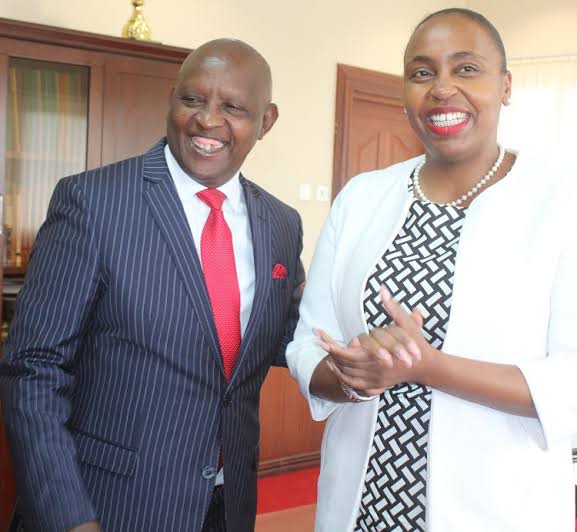 A file photo of governor Mutahi Kahiga and his deputy Caroline Karugu.

After having gone silent since her dramatic divisions and fall out with her boss governor Mutahi Kahiga, Nyeri deputy governor Madam Caroline Karugu has finally resurfaced.

Madam Karugu was seen in the company of the governor in public for the first time in months during the presidential visit of Dedan Kimathi University of Technology in Nyeri.

The two county leaders are seen standing on the opposite sides of the Head of State as they listen to a presentation being made by one of the facilitators at the institution. 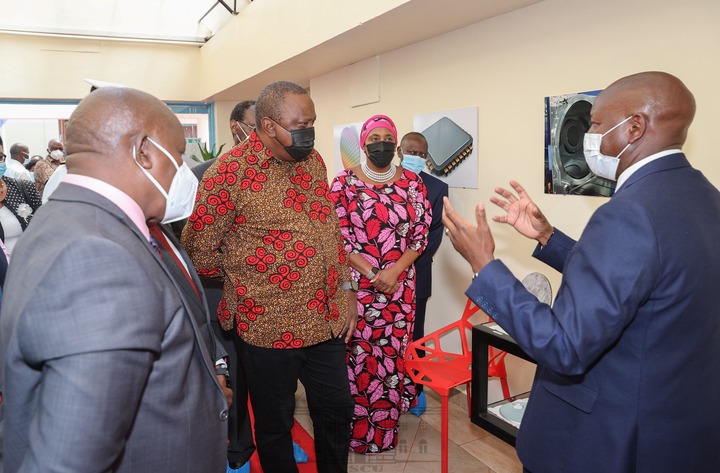 The differences between the two leaders came out during an interview that aired on Mt Kenya, the Nyeri governor claimed that Karugu no longer took part in the county's affairs.

He further disclosed that she is never seen at the county offices adding that county staff have learned to let her chart her own path. 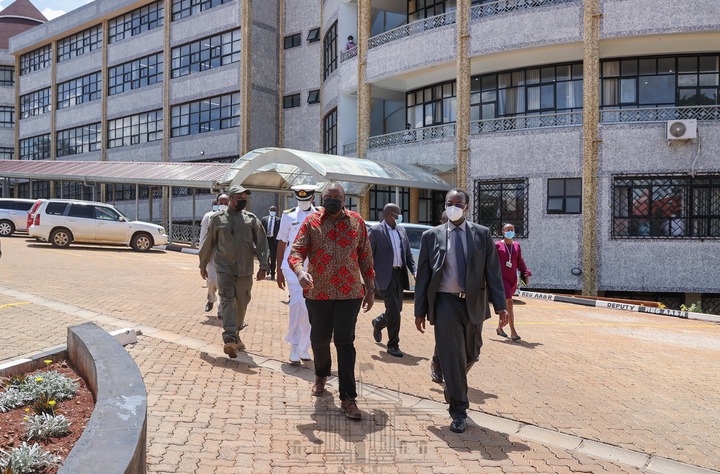 President Uhuru Kenyatta is currently in Nyeri County where he will preside over the launch of the Semi-Conductor Technologies factory.

The factory, which is the only one of its kind in Africa, is a Public Private Partnership (PPP) between the Dedan Kimathi University of Technology and American nanotechnology firm 4Wave Inc.

The factory manufactures nanotechnology products such as integrated circuits and sensors used in electronic gadgets for the global market.

Below are some of the reactions from Kenyans.

"Now Kenyans can see they were not mad when they elected you to serve them for 10yrs as their president.Everyday is launching a project.You are the best sir.Kenyans are happy,and we say you're too young to retire."Mwema

"Now this is what we want.. Self reliance in the manufacturing industry is the key to economic revival. Hongera Mr president"Samuel

"You are locking citizens from moving from Nairobi to other places to go hustle but you are freely moving for nothing at all. Woow.. You are really leading by example sir"Rapse

"My President we would have appreciated some photos of the semiconductor area and how it works for us to appreciate the advancement in tech in Kenya.Proudly Kenyan"Shadrack

"Congrats , put more funds to it and others that need funding for more local production/manufacturing, this will create job opportunities for the youths and business will pick in the nearby towns and trading centres."Ndun'gu.

"One of the early harvest..project on the possibility of a US/FTAIt’s showcase example that the best resource in our country is our Human capital,"Gacheru

"As much as we appreciate the good things that this factory will come with, Let's not forget this move is entirely to counter Chinese semi-conductor manufacturers by the Americans. The demand right now is higher than supply "Amos

Bad News To The Teaching Profession After The Following Revelation

Why No School Should Open Tommorow(Opinion)

How is China able to Fund its Infrastructure without Foreign Debt?

Wetangula: If The Church Leads From The Front, Kenya Will Go Very Far Am Sure Of That